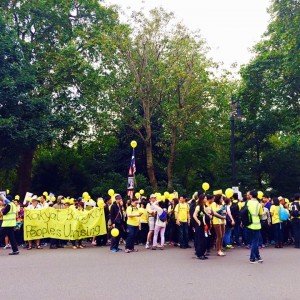 Six years after being declared PM, Najib Abdul Razak’s “1Malaysia” may well be the slogan which, ironically, best defines his premiership. A united Malaysia in which all the races became one unit, to fight an oppressive regime. Najib must be fuming.

When he promoted his “1Malaysia” soundbite, people were full of hope. He promised many things, like reform, and that he would deal with corruption, but these were empty promises.

His “1Malaysia” slogan started off well, but the cracks soon widened. The slogan was rebuffed, by his former deputy, who said, “I am Malay first, before Malaysian.”

Gradually, as Najib reasserted his affirmative action policies, most people rejected his “1Malaysia” soundbite. Even former PM Mahathir Mohamad criticised Najib’s slogan and said that he did not understand what it meant.

Even Mahathir joined the Bersih 4 rally, to show his disgust at Najib. He had earlier alleged, “.. Najib has paid-off Umno members”.

It is disingenuous of Najib to claim that Bersih has achieved nothing. If anything, the government has been stunned and rattled by the strong worldwide support for Bersih 4. That is the problem with Umno-Baru ministers. They live in a closed world, where no-one is allowed to express dissatisfaction with the leaders, nor offer new ideas, nor allowed to veer from the norm, and all must defer to their elders and senior leaders.

In London, arguably the world’s capital for activism, Malaysians rallied to the call of Maria Chin Abdullah, of Bersih, and turned up in front of the Malaysian High Commission, to show their anger at Najib.

People started to arrive at least an hour and a half before the start of the rally, to purchase t-shirts, which soon sold out. The London Underground and buses leading to Hyde Park Corner were filled with people in yellow, all eyeing one another, knowing that they showed one purpose; Bersih 4.

At its peak, Bersih 4 London had 2,000 people chanting slogans and making speeches in front of the High Commission. Clare Rewcastle-Brown of Sarawak Report and Marina Mahathir were unexpected guests.

People had come from all corners of England and Wales. Malaysians from Europe had flown in, specially to attend the rally. One lady, a former TV3 journalist, who lives in Germany and whose father had been detained under the ISA said, “I am so happy to be here today and so glad to be part of the Bersih rally. TV3 is not the TV3 I once worked for. It is now a propaganda machine.”

A student, who came from Brighton said, “I want to exercise my right to speak out against this government. I have relatives in Tanjung Rambutan in Perak and they are struggling. They think that the RM2.6 billion donation is for them, to be disbursed in BR1M. I am appalled that the rural people have been duped.”

A Malaysian, working in the charity sector near Birmingham said, “We made noise. We rallied. We chatted. I am not sure if our actions today was a kick up the authorities backside, or just a gentle whisper that the rakyat doesn’t trust and don’t like them.”

The march continued from the Malaysian High Commission, and snaked its way past the Queen’s official residence, past the Houses of Parliament and stopped in front of the prime minister’s office and residence, at 10 Downing Street. More speeches, more chants and singing, before the yellow procession continued towards Trafalgar Square, where the rally finished.

The rain, which came in the late afternoon, did not dampen the spirits of the Bersih rally goers. There were children, toddlers, babies and a heavily pregnant mother. There were old and young, people with walking sticks, yellow balloons, and dogs. An Orang Utan perched on someone’s shoulder, to highlight the destructive effects of oil palm. There were many inventive placards with messages for Najib, such as; “Where did you get your USD 700 million donation” “Game Over Najib.” “Share with us some of your booty”. “You have only 8 lives left”. “The worst PM in the world.”

The Malaysians living in Singapore, had been refused permission to protest, but their plight was highlighted by a placard, which was lifted high above the crowd.

As the last speech was made, someone mused, “If only we had taken action 20 or 30 years ago, we would not be in this dire state. We must take responsibility for that!”

This article was published in FMT, seeÂ http://www.freemalaysiatoday.com/category/highlight/2015/09/01/1malaysia-realised-at-last/ on 1 September under a different title.