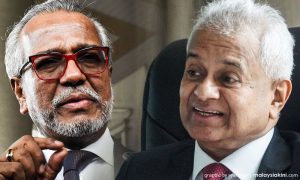 Najib Abdul Razak’s hot-shot lawyer, Muhammad Shafee Abdullah, claimed that whilst he was playing with his pet dog, he fell and possibly fractured his wrist.

Ahhhh….schoolboys used to give “the dog ate my homework excuse”, but when a hot-shot Umno-Baru lawyer, uses the doggie excuse, he only sounds desperate.

At least, Najib has skilfully mastered social media to try and uplift his image of a man being persecuted and victimised by Pakatan Harapan.

Shafee has done the opposite. Social media successfully ridiculed him that he lost all credibility as a hard nosed, hard-as-nails and dismissive lawyer.

What did he do to claw back his image? The following day, he issued a long, rambling, blow-by-blow, bark-by-bark account of his rough-tumble with his dog. 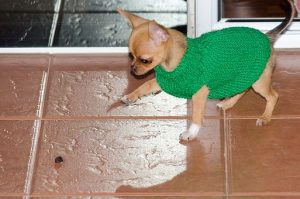 It was a long report by Malaysiakini, which you can read here. (It is “cheong hei” and will put you to sleep.) The report is around 2,000 words long with half of that dedicated to how he bought his first dog, a mixed-breed, to turn into a guard dog.

Thinking about the future, to prepare for any eventualities, he bought another mixed-breed puppy to keep the first dog company. 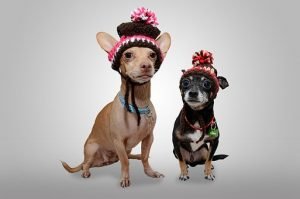 It was the puppy, which is now 10-months old, which caused him to fall.

He then went on to describe how his human guards are not as good as his guard dogs. Then he said his dog is so playful, strong and big for his age, as well as strong, fast, cunning, playful and obedient. (Yawn).

True to fashion, he boasted about his professional dog trainer who is a former police K-9 unit personnel trained by the FBI. I suppose he wanted us to be impressed…(more yawns)

Then he described the actual encounter of the playful pup which made him lose his balance. He fell “squarely on his left arm” but he was such a hero, that he did not feel any pain till several hours later.

This went on, and on and on. (Careful! You might fall asleep and fall off your chair). 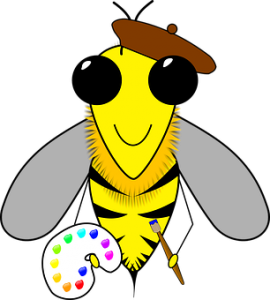 Shafee described how his Indonesian employee massaged his hand, whilst he worked with his other lawyers till 1 am. Perhaps, we are supposed to praise him for his dedication to duty.

When he said, he felt his arm stiffening, because he believed that it was “due to working hard in preparing for the appeals at the Court of Appeal on Monday and Tuesday”, one did not know whether to laugh or feel pity for him.

That stiffening in his hand is more likely arthritis setting in.

There was more of the “I was working till 4.30 am” stuff  and more of the same of how he was such a hard worker, continued into the next day’s events.

The amazing thing is that he sounded desperate. He said too much, in great detail. He thought he could convince us, but he only managed to do the opposite.

The dog was actually a red herring. because Shafee was leading-up to the bit where he blamed the Attorney-General’s chambers for delaying Najib’s trial.

The other amazing thing is that whilst you and I are not fooled by his excuse, the three appellate judges, Zabariah Mohd Yusof, Lau Bee Lan and Rhodzariah Bujang appeared to believe his “wrist injury” shaggy dog story.

He showed Malaysiakini reporters his almost-the-size-of-a-tennis-ball size swelling on his left hand.

If he was in pain and worried about a possible fracture, why did he not immediately go to the A&E of the nearest hospital or a clinic, after his fall?

If he had broken any bones, he would not have been able to function as he claimed to have done.

Anyone who has experienced broken bones, knows the excruciating pain. He would not have been able to attend a hearing at Shah Alam and then Putrajaya, and also work late until the early hours of the morning, as he claimed to have done. 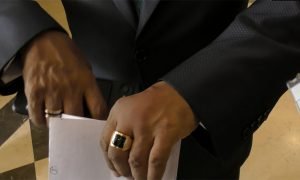 Moreover, if he was worried about the swelling on the area between his wrist and his fingers, why did he NOT remove his massive ring in case the blood supply to it was constricted?

So, is Shafee more of a Mat Temberang trying out the latest delay tactic, or is he just “cheong hei”?

He’s such a drama queen.

The whole nation is happier to wait for the real drama in court, on Friday.