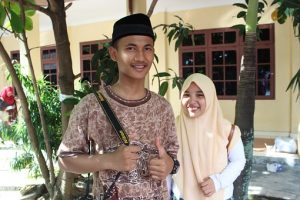 Najib Abdul Razak has two powerful secret weapons to control Muslims, in particular the Malays. It is for Malaysians – yes you – to destroy them!

He is scared of “Aunties” like Maria Chin Abdullah, the leader of Bersih, whom he arrested and placed for 10 days in solitary confinement. He hounded the dance choreographer, Bilqis Hijjas, who released yellow balloons which landed close to him. Umno-Baru thugs, thrashed Zunar’s exhibition, in Penang. The same thugs which stormed the Penang state assembly in 2014.

Najib uses the state machinery, like the inspector-general of police (IGP), the civil service and the judiciary, to do his bidding.

One secret weapon is the PAS president, Hadi Awang.

When Najib has bad news to hide, Hadi’s hudud bill is used to maximum effect, to put the fear of God in Malays.

Last May, The Wall Street Journal revealed that Good Star Limited was owned by Jho Low. Several hundred millions of ringgits of taxpayers’ money had been sent to Good Star, and then redirected to Najib’s personal account.

He also used this bill, to distract us, when we were angry over Maria’s detention, last November.

Minister in the Prime Minister’s Department, Azalina Othman Said, moved Hadi’s  bill from the bottom of the list, to the top of the pile, last year.

With her legal background, Azalina should have known that this bill goes against the Federal Constitution.

A nation cannot be ruled by three sets of laws. Civil law, syariah law and one for the elite.

“You help me, I help you” in Kelantan

Najib will collude with Hadi, and use Islam as the proverbial whip.

Umno-Baru hopes to be returned to power, but they need Hadi’s help. The hudud bill, in Kelantan, is the price Umno-Baru must pay for this help; but be warned, hudud is like a cancer, if not excised, it will spread throughout the country.

Muslims are afraid to speak out, with the millstone of Islam weighing them down.

Social media is perhaps the only place Malaysians can voice their frustrations easily.  Najib may think he is strong, because the majority of Malays are in denial about Umno-Baru.

Their silence is Najib’s best weapon.