If you believe in bomohs, next time call Harry Potter.

Last week, when I wrote about bomohs being used to search for missing teenager Nora Quoirin, some readers were furious.

So, why do we bother with policemen, the army, helicopter, tracker dogs etc?

The disappearance of a missing person is serious. To bring in a bomoh is a sign of desperation, or that the authorities have no confidence in their methods.

If one is desperate, just go over the procedures, and check for flaws. Ask others to see if some aspect of the procedure, has been overlooked. Retrace and recheck the steps. Be analytical. Be forensic.

To call in a bomoh means one has no faith in one’s own abilities.

If it there is any truth in the allegation, inviting the bomoh makes our authorities look stupid. Next time, why don’t we just employ lots of bomohs. Some of our universities are already selling anti-hysteria kits and promoting courses on witchcraft.

Bringing in a bomoh, officially of unofficially, is an insult to the relatives of the missing person. They will have no trust in the authorities.

I said that allowing a bomoh to take part in the Search and Rescue (SAR) mission, risks making Malaysia look like idiots. There was world-wide mockery of Raja Bomoh, when he appeared in Kuala Lumpur International Airport (KLIA) to look for MH370 using his carpet, bamboo telescope, fishing trap and green coconuts.

He had no consideration for the feelings of the relatives of the missing people on MH370. He added to their grief. He belittled the SAR mission, he diverted everyone’s attention and if he wanted to entertain, he should not have chosen MH370. Bomohs should not use other people’s suffering to get attention.

Offering prayers may comfort those who are religious. Bomohs or shamans do not! 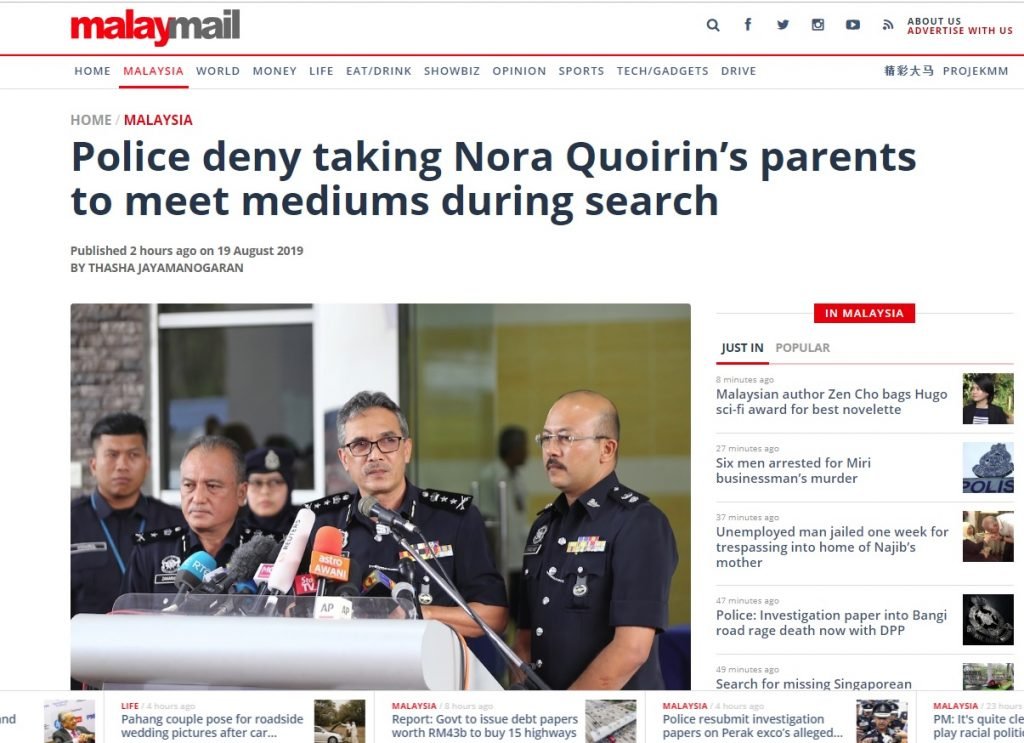 Mohamad Mat Yusop, the Negri Sembilan police chief, denied claims in a foreign newspaper that claimed his police force had taken Nora Anne Quoirin’s parents to meet four bomohs, because they had no new leads nor new clues, in the search for the 15-year-old teenager.

Mohamad told  the Malay Mail , “No. I had never instructed any of my police officers to do so.”

He was unhappy with the ridiculous comments in the media and requested that people stop making these irresponsible and unhelpful remarks.

He is right, but in future, any bomoh who turns up uninvited must be shown the door because their presence will invite ridicule. 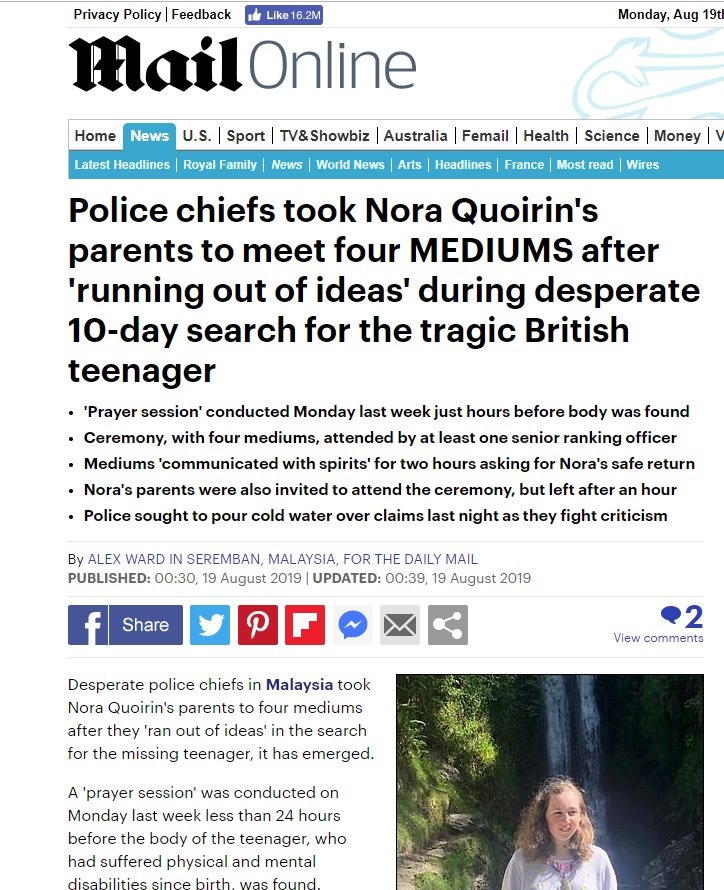 According to this paper, a ‘prayer session’ had been conducted on Monday last week, and that within a day, Nora Quoirin’s body had been found.

A source close to the investigation said: ‘Nora’s parents attended a praying session the day before the search teams found her body.

‘The mediums said the spirits agreed to return Nora to the family.”

So, what do you think?

A coincidence perhaps? Or do you believe in bomohs and their ability to communicate with the other world? 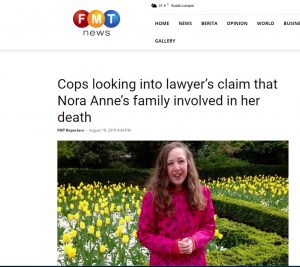 4. Allegation is made that Nora Quoirin’s parents were involved in her disappearance

Lawyer and child activist, Anne Brennan, has alleged that Nora’s parents have something to do with her disappearance. She said that the family’s recent announcement, that they were leaving Malaysia with the teenager’s body was highly suspicious” and she alleged that the family was doing “everything in their power to subvert the course of justice”.

An excerpt from the paper report said: She also alleged that Nora Anne’s parents, Meabh and Sebastien Quoirin, had “high-tailed” it out of the country upon receiving a guarantee that they would not be investigated for any involvement in the teenager’s disappearance and death.

Brennan said that the entire matter was a “cover-up”, and said that the Quoirins had given no account of their movements in the hours before they reported their daughter missing.

“All the simple routine things that happen in a missing child case and criminal investigation failed to happen in the case of Nora.”

Brennan also said the police had confirmed there was no evidence of a “third party” entering the family’s villa on the night Nora Anne was reported missing.

“There was no evidence of a struggle. No fingerprints, footprints, or screams. Nobody heard anything.

Nora was found on the 10th day of her disappearance. She was naked and lying across a stream. Her head was resting on her hands, as if in sleep. Forensic tests confirmed she had not been sexually assaulted and the only marks were scratches on her feet. There was no element of abduction or kidnapping

The link is here.

So, did the victim know the perpetrator? Did Nora know who led her away, if she had been led away into the jungle?

Police confirmed there were no signs of a struggle or abduction.

Did the police ask if her parents had scolded Nora, or the family had quarelled the night before? Did Nora step out of the villa, because she was upset and wanted to cool down, then got disorientated? However, we are told that Nora suffered from a debilitating brain condition called holoprosencephaly, which caused her difficulty walking, balancing and looking after herself. Could she have sneaked out herself?

Was Nora happy to be on holiday and excited at going to the waterfall that she decided to look for the waterfall, on her own? However, her mother said that she needs someone else to help her manage.