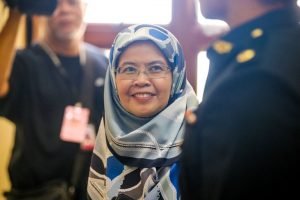 Malaysians are indebted to National Audit Department (NAD) staff officer, Nor Salwani Muhammad who in 2016, secretly kept one of 60 copies of the original 1MDB report which the department had prepared.

Her boss and the top civil servants wanted to destroy the 1MDB copies. This tells us a lot about their lack of integrity.

Her superiors’ actions, also reveal that the Malaysian civil service has been mismanaged and corrupted by its leaders and high ranking civil servants.

If Nor Salwani did not do what she did, we would never have found out the extent to which disgraced Najib Abdul Razak and his inner circle of top civil servants, tried to hide the truth, tried to fool us and attempted to mislead the investigators wrt to the funds borrowed by 1MDB.

Today, Nor Salwani’s report has been used as evidence in the High Court, in the trial against the disgraced Najib, for ordering the tampering of the 1MDB audit report.

Her boss at the time, the then auditor-general, Ambrin Buang, had ordered that all 60 copies be destroyed, to prevent leaks, and only the modified copy was submitted to the Public Accounts Committee.

Nor Salwani had other key evidence in the form of a two hours and 45-minute audio recording of a meeting on Feb 24, 2016, held by top officials from government and 1MDB.

The ones who told her to destroy the audit report are colluding in the fraud.

Her superior(s), are meant to be auditing the report, but they did not.

Nor Salwani has maruah (dignity), courage and integrity. Her superior(s), and the top civil servants who were at the meeting, who okayed the destruction of the 60 copies, do NOT have any integrity. They are complicit in Najib’s wrongdoing. The Malaysian civil service has been mismanaged and corrupted by its leaders.

When will they be investigated?

Our deepest gratitude goes to Nor Salwani. The nation is indebted to  her. She showed immense courage to do what she did, knowing full well, the consequences to herself and her family, if her actions had been discovered by Najib.

Thank you for saving Malaysia.