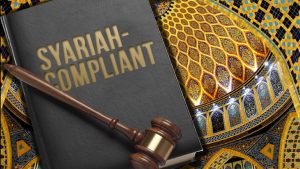 Syariah-compliant businesses and provision of halal items, has taken Malaysia by storm.

One Muslim said, “We have halal lifts, halal trolleys, halal eggs, halal vegetables, halal wi-fi, and halal smartphones! The increase in syariah compliant businesses shows that Malaysia Malays, are more pious than the generations of Muslims before them.

“We should be in the Guinness Book of Records for being the best Muslims in the world.”

A Muslim syariah-compliant trader said, “Some jealous people think that we use the halal logo and ignore other concerns, like safety. No! Our competitors are jealous because we print some Arabic phrases on our products and get an Islamic scholar to endorse them. We offer a syariah-compliant business, not a get rich quick scheme. We make good money, because God is on our side.”

Here is what no one will tell you about syariah-compliant businesses and halal items.

Rayani Air was well received by many Muslims. Prayers were said before, during and after take-off.

Despite workers covering their aurat and offering halal food, with no alcohol, Rayani Air, was not prepared for the turbulence, from the alleged sabotage, which grounded its flight in Langkawi.

The airline was also grounded because some people in authority failed to check that the company was financially and technically viable.

Pious and sanctimonious Malays like to emulate life in the 7th Century and feel a strong urge to abandon their cars and use camels instead. They are happier because the pendatang mechanic cannot charge exorbitant fees for car repairs. The sanctimonious man only needs to provide his camel with plenty of water and hay.

As an added bonus, the Mufti of Perak, has given his approval to those who wish to “entertain” their lovers whilst riding a camel.

If the sanctimonious person would like to have four wives, four camels would probably be cheaper than Proton cars.

Just think of the savings in breakdown charges, servicing and petrol. Gone is the frustration, awaiting spare parts.

His camel is a multi-purpose animal. Besides transporting him around, the camel’s manure can be used for growing vegetables, especially as GST has increased the cost of food. His vegetables will be halal, as no chemicals or pig manure have been used to fertilise the plants. Camel milk can be used to feed the family. There will be no more scares about butter being tainted with porcine DNA.

Unlike the car which emits noxious exhaust fumes, the camel stinks at both ends. Halal or not, the breath of a camel can knock you out! The camelâ€™s farts are worse, but no worries, there are no poisonous carbon monoxide fumes and soot. Just plenty of methane and mercaptans, derived from halal hay and water.

These hotels will forbid amorous couples from checking-in for a night of passion. The upshot of this will be that the moral police will be out of a job.

The other disadvantage is that only ultra-rich men will be able to afford mistresses. They will have to make several overseas business trips for dirty weekends, or else buy the mistress an exclusive apartment, in a gated community, to hamper the efforts of the few remaining moral police.

Many Muslims think that sex education is an excuse for free sex. The truth is perhaps, teachers are too shy to admit that their students know more about sex than they do.

In one survey, results showed that the most frequent viewers of online pornography were from the Middle East.

Malaysians need not worry because we have laws which allow, and in some cases insist upon, underage marriages.