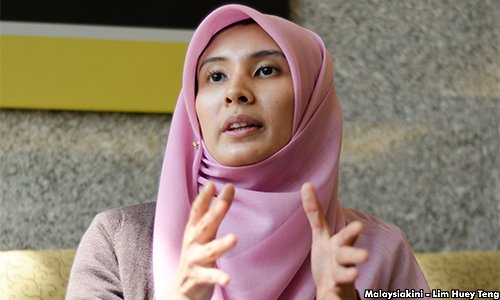 On 11 May, PKR vice-president Nurul Izzah Anwar was put on the spot at the World Economic Forum in Phnom Penh, when CIMB chairperson Nazir Abdul Razak, asked her, “Can you share a little bit more about your first meeting with Mahathir Mohamad after everything. Was it so easy to forgive him?”

Some people were dismissive of Nazir’s question and found it loaded.

Others considered it to be a perfectly acceptable question.

Nurul is part of the Opposition coalition, which is trying to remove the Prime Minister Najib Abdul Razak, from power. The former PM, Dr Mahathir Mohamad has also made it his mission to oust Najib. We know that Mahathir’s former nemesis is Nurul’s father, Anwar Ibrahim.

Half the nation is perturbed and furious that the Opposition is teaming up with Mahathir, in his newly found partnership with the Opposition.

The reason we are at this juncture in Malaysian history is because of the seeds planted by Mahathir four decades ago. Racism, the use of religion to wield power, cronyism, nepotism, affirmative action policies and swift punishment for dissent. Many people cannot forgive him.

It will be interesting to see how Nurul copes with having to work with her father’s former adversary. It cannot be easy, but as we have seen, she has put on a bold front, and more importantly, put her country first as she set aside her personal feelings to work with Mahathir.

The questions she could not have asked at the time

At the time, Nurul was not in a position to ask Nazir questions. Nevertheless, we will ask Nazir, the following questions on her behalf. Questions which she could have put to him, if she were not in the political limelight.

First: Can you share a little bit more about your initial reaction, when The Wall Street Journal (WSJ) reported, in April 2016, that your elder brother, Najib had deposited US$7 million, into your account? Was it so easy to forgive him for dragging you into the 1MDB scandal?

Second: You are the chairperson of CIMB. You know that investors are keeping a close watch on Malaysia, especially in the wake of the 1MDB scandal. You claimed, in a letter to the WSJ, that the US$7 million, was disbursed to BN politicians, as campaign funds for GE-13. You also assumed that these were donations from companies and individuals. Did you think that these were legitimate funds, just because your brother had given them to you?

Third: We would not have known about your handling of these funds, but for the revelation in the WSJ. A banker of your standing should have realised that his reputation would be at risk. Did you go ahead and do as he instructed, because you know your brother will protect you, in any eventuality?

Fourth: You voluntarily stepped down, so that CIMB investigators, with the help of Ernst and Young, could help to clear your name. This is Malaysia, where anything is possible, where patronage, political, family and social links count. Are we to believe the results of this “independent enquiry”, just as you believed that funds from your brother were above board?

Fifth: You appeared to think there was nothing wrong with the favour your brother asked of you. Most of us would have had to go through the normal checks and balances to avoid a charge of money laundering. Surely, your actions were against normal banking practices. If Najib was not doing anything illegal, why did he have to go through you, and not the normal banking procedures?

Sixth: Mahathir may have repented, and is trying to atone for his sins, by helping to restore credibility to the governance of Malaysia. Your brother merely emulated Mahathir’s Sodomy I, to pin down former opposition leader Anwar Ibrahim. The farcical Sodomy II trial has raised more questions, with the allegation that RM9.5 million, from 1MDB, was used to pay the lawyer, Muhammad Shafee Abdullah, to lock away Anwar. Can you forgive your brother for engineering Sodomy II?

Seventh: Can you forgive your brother for tarnishing your father’s legacy, and more importantly, dragging Malaysia, down into this hell-hole?

Eighth: You claimed that you would not help Najib again. Would you care to answer the recent allegations by Sarawak Report that you handled other payments to various Umno-Baru politicians, after GE-13?

Ninth: What has happened to the National Consultative Council (NCC2). Please confirm that it is dead and buried.