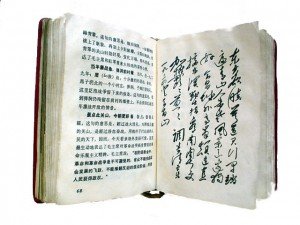 Exactly one year ago, on 29 November 2013, I wrote an article called “One Ideology, Two Reactions” .

The reaction from the authorities was swift. The Inspector General of Police (IGP) Khalid Abu Bakar issued a warning, at a Press Conference in Kota Kinabalu Sabah, that my article was “highly seditious”. He threatened…”You better watch out…”

You can read the article and judge if it contains seditious material. It is a simple write-up to compare how the government treats two people, both Malaysian, a man and a woman, who embraced communism. One fought for his ideology in the jungles of Malaya (this was before Malaya became Malaysia), the other lived her ideology in the concrete jungle of London.

One is Chinese, the other Malay. One is perceived as a threat, even though he is dead. The other was going to be received with open arms by the government, with offers to reinstate her citizenship, counselling to guide her through her traumatic experience of being “found” and other help to rehabilitate her…until she rejected all offers of help.

Despite a Peace Treaty, the government reneged on its deal and members of the Communist Party of Malaya (CPM) were cheated. Basically, promises were not fulfilled. The woman in my article has not renounced her ideology but the government wasÂ  prepared to embrace her until she mocked their efforts.

Anyway, read on to see if what I wrote is highly seditious. I think that Khalid can’t have read the article in full. Like many Malaysians, he might skimmed the title and perhaps, the first line… If it was his minion who read it on his behalf, then the minion, and his boss, need to go back to school!

The moral of the story is that this government is scared. It has lost the plot. It picks on innocent people, to harass and punish them by charging them with sedition. You, the rakyat must unite and fight against a corrupt and oppressive regime. If you don’t do it now, then when?

Two people with a shared ideology â€“ communism. Both Malaysians, both radicals. Both have spent the past 30 years living outside Malaysia. Both were educated locally, one at the Methodist run Anglo-Chinese School (ACS) in Perak, the other at the Tengku Khursiah College in Negri Sembilan.

The two people are a Chinese man, 88-year-old Chin Peng who died in Bangkok last September and a Malay woman 69-year-old Siti Aishah Abdul Wahab who with her two comrades staged a daring escape from her alleged captors on Oct 25.

Aishah and the other women had been kept as â€œslavesâ€ in a collective by a couple â€“ an Indian and a Tanzanian for the past 30 years.

He also confirmed that when she went to London to study, the police had kept her under surveillance. He did not make it clear if, or when, the surveillance stopped. Khalidâ€™s revelation coupled with the information provided by PKR politician Nurul Izzah Anwar that there are 30 Special Branch (SB) officers in London begs the question: â€œWhy did the Malaysian police not inform the family of Siti Aishah at any point in the past 30 years that Aishah was alive and well and had not disappeared without trace from her last known address?â€

Was Khalid being economical with the truth or is he deliberately misleading the public to justify the large numbers of SB personnel operating in London? Was Aishah really being watched in London? Did the police and SB lose sight of her soon after she arrived in London? Was she only briefly under their watch?

Did they keep her family in the dark because her return would generate publicity about another Malay communist, which would be difficult to hide? So they thought it would be best if she were to stay away from Malaysia. They were happy to wash their hands of her. Another Malay communist was one red too many.

Khalid claimed that Aishah would not be arrested if she returned as her communist activities were â€œin the pastâ€. Does the IGP know for sure that she has renounced her communist ideology?

Malaysians must wonder why Aishah is considered safe but Chin Pengâ€™s ashes are deemed a national threat. The authorities feared that a martyrâ€™s shrine for Chin Peng would be built in Sitiawan. Would Aishah not attract an extraordinary amount of publicity whether or not she still believes in her communist ideology? How will she recover from her trauma if she is not left in peace?

One is dead, the other is alive. According to a colleague who visited Chin Peng a few years before he died, the former Communist Party leader was very articulate, spoke fluent English and was a â€œnice old gentlemanâ€. He did not show any bitterness about being banned from returning to Malaysia, despite the terms of the Peace Treaty.

A few of Aishahâ€™s acquaintances allege that in 1982 when they last had contact with her Aishah was still committed to her ideology. The British press have reported that Aishah is highly traumatised and the police will not allow consular officials or her sister to contact her.

More disturbing reports emerge. The High Commission in London has said that it would extend its full cooperation to reinstate Aishahâ€™s citizenship if she had unknowingly lost her identification papers during her 30-year imprisonment. We are thankful that the global network of the Foreign Ministry is diligent in performing its responsibilities in assisting Malaysians in various parts of the world.

So why canâ€™t the same assistance be made available by the necessary departments in Malaysia to serve the hundreds of thousands of stateless people who were not registered by their poor and uneducated parents? Parents who may be the rural Orang Asli, the interior bound Penan or Indians who live on rubber estates?

On Nov 23, the Women, Family and Community Development Ministry said that it would provide counselling to Aishah. Critics fear that the Womenâ€™s Minister is only swapping one ideology with another â€“ communism for Umno-Baruism â€“ and that this would cause Aishah further mental distress.

Wisma Putra, the Womenâ€™s Ministry and the IGP are keen to help Aishah. By all means show compassion but make sure that compassion is extended to all Malaysians and not a select few individuals who just happen to be making headlines in the developed world.

If Aishah is promised counselling, the same should be given to the traumatised victims at home; the ostracised Penan women and young girls who were raped by timber workers, the family members of people killed in violent incidents like Batangkali, Memali, Kampung Medan and May 13.

Donâ€™t dance in the limelight just because Aishahâ€™s story is big news in London.