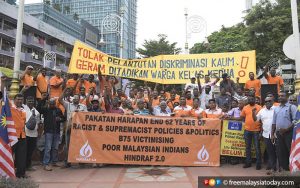 It was both frustrating and disappointing, when P Uthayakumar, the leader of the Hindraf 2.0 party, failed to appreciate the aspirations of the majority of Malaysians, in New Malaysia. Hindraf 2.0 is a splinter group of Hindraf.

Most of the rakyat want an end to race based policies, parties and electoral constituencies, but on 12 May, Uthayakumar demanded the creation of seven Indian-majority parliamentary seats. Hindraf 2.0’s request is similar to Umno-Baru’s gerrymandering, in the run-up to GE-14. 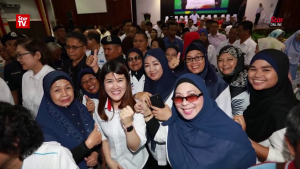 Did Uthayakumar not read the papers? In Sandakan, there was a swing of Muslim voters to the DAP candidate, Vivian Wong. They put their trust in her, a Chinese, a non-Muslim and a woman, from a party that has always been villified, by Umno-Baru, as a racist, Chinese party. The peninsular Malaysians, and Uthayakumar have much to learn from the people of Sandakan.

So, when will Uthayakumar start thinking in terms of being a Malaysian first? One cannot deny that there are occasional setbacks, like the Pakatan U-turn on ICERD & the Rome Statutes, the continuation of the affirmative action policies, and the rules on matriculation, but with continued dialogue we will be able to wipe out racism and race based policies. 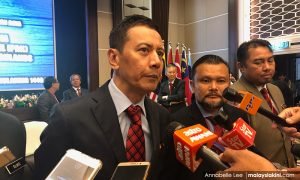 He should recall that in the run-up to GE-14, disgraced Najib Abdul Razak, in collusion with the EC, went through an exercise to create Malay majority areas. Umno-Baru’s influence on the EC prevented the termination of this delineation exercise. Uthayakumar should realise that we want fair constituency sizes and numbers of voters in each constituency.

Malaysians did not get rid of Umno-Baru in GE-14, only for Pakatan to enforce the same race based voting patterns because of pressure from Hindraf 2.0. The constituencies should not be slewed to the advantage of Umno-Baru, Pakatan or Hindraf.

If Uthayakumar is keen on his idea, he should put himself up for election.

On 12 May, Uthayakumar and 100 of his supporters demonstrated in Brickfields, and accused the politically and economically powerful Malay and Chinese of ignoring the needs of the poor Indians. He said, “For 62 years, they haven’t spoken up for Indians, be they from BN or Pakatan Harapan.”

Isn’t Uthayakumar being disingenuous? BN have been in power for 61 years during which a lot of bad practices were established but never questioned. Pakatan may have completed one year in office, but they cannot undo all the wrongdoings, overnight. Some people reckon that Pakatan has done more for the Indians, in one year, than the MIC did in 61 years. 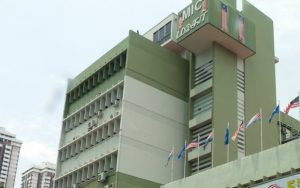 He should question the role played by the MIC. In the early stages, they may have addressed the issues of the Indian poor, but like Umno-Baru, money corrupted the morals of many of their MPs. They helped themselves instead of helping the people.

After GE-14. the economy had to be prioritised. Of equal importance was the effort to bring to justice the previous corrupt leaders. The electorate does not want Najib to escape scot-free. Nor can justice take too long, or else Najib will boast that he is innocent.

The nation was left with a RM1 trillion debt, and the Finance Minister has to juggle his finances and still convince foreign investors that Malaysia is a safe bet, after being portrayed as a corrupt country.

Pakatan must handle the pro-Umno-Baru/BN sympathisers amongst the civil servants, with caution, as they may attempt to scupper the efforts to initiate the reforms. National security is also of concern. On 13 May, a few days ago, the police prevented terror attacks, by extremist militant Islamists, ostensibly to avenge the death of fireman Adib. If it is of any consolation to Uthayakumar, the Independent Police Complaints and Misconduct Commission (IPCMC) will be formed after Raya.

Uthayakumar is incorrect to claim that no MPs have spoken out for the Indian poor. Nor is he being fair, when he says that Indian MPs have no voice because “they won on the votes of the Chinese and Malays,” and that they “dance to the tune of the Malay and Chinese political masters.”

Pakatan must focus, despite the distractions caused by Uthayakumar’s intervention, especially as the country needs to heal and be united.

Sandakan is a shining example of the rejection of race & religious based politics, and corruption. We can learn from the Sabahans, but will Uthayakumar?