Skip to content
4.2K+Shares
Padan Muka!  Now you have the Malaysian Prime minister who is Malay first – Muhyiddin Yassin. 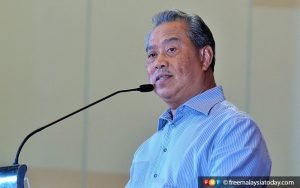 1. Whilst you blamed Mahathir and championed Anwar and his sideshow, the front door was left open for Muhyiddin Yassin, of the I am Malay first infamy, to walk in and sit on the throne. Happy now?
2. Why don’t you just give the premiership to Hadi Awang, the PAS president.
At least he will isntall a syairah government, and the economy will be run down that you and he, will beg someone who is cabpable to take over.
3. You blamed Mahathir for last Sunday’s coup.
You said Anwar Ibrahim should be PM and he will clear-up the mess.
A country can only have one leader. You gave Mahathir the mandate to rule, in GE-14, so you should have  left him do his job but you got sidetracked and focussed on Anwar’s succession.
4. Why could you not let the ministers do their jobs and kick them out at GE-15 if they do not perform. Those like the black shoes minister, the flying car minister and a clutch of other useless ministers.
5. Instead, you joined Anwar in his little side show and wasted precious time and energy.
You helped to distract all of us.
6. Anwar just wants to be PM. He can’t think of anything new to say.
Please list his achievements in office, during Mahathir’s first premiership, when he was in that Cabinet, that are noteworthy. What were his successes in building the nation?
7. Most of us supported the effort to free Anwar from jail. Those were politically motivated charges. It is our duty to get justice for him, but that is where our help should stop.
We rallied to get him out of jail, but not to make him PM.
8. He is out. Did you promise him the post of prime minister, without seeing if he is qualified?
9. Is being a jail and “suffering in jail” a qualification? Some of you seem to think so.
What about the people who were thrown in jail for the most flimsy of reasons. They suffered. Some were beaten to death. Their families also suffered. Why not offer the ones who survived, the post of PM?
10. Lim Kit Siang, Karpal Singh (deceased), Mat Sabu, Lim Guan Eng, Syed Husin Ali and many other Malaysians (Malays and non-Malays) were jailed. THey suffered.
Do they have a right to be PM? Being in jail is NOT a qualification to be PM.
11. Stop being shallow and get the competent politicians to have a chance at being PM.
Competency does not look at race or religion or gender.
The front door was left open and the prime mover of last Sunday’s coup, Muhyiddin Yassin, just breezed in and  sat on the throne. What did I say about race and religion?
12. I said that the outcome of the failed political coup was the best opportunity to start from square one.
Many of you said I was wrong. You said I was Mahathir’s puppet. You said I hated Anwar. I don’t hate him. I just pity him.

We have seen how Pakistan, Afghanistan, Somalia and other Muslim nations slide from bad to worse, with the religious narrative.

Second.  Choose the BEST MAN for the job. He could be male or female, malay or non-malay, Muslim or non-Muslim.

Third. But many of you said I was Mahathir’s supporter. FYI, I have been Mahathir’s critic since I was a teenager.

Many of his policies of the 80s and 90s, during which time, Anwar was a member of his Cabinet and his deputy.

Take away Anwar’s time in prison and the reformasi movement, now show me his achievements.

Four. Many of you say now is not the right time to remove race and religion from politics.

Now tell me, “When is the right time?”