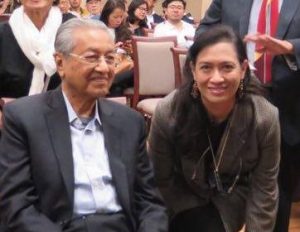 Remember PM Mahathir Mohamadâ€™s talk in London on 21 Sept? One word sums it up: â€˜Pathetic!â€™

The description is not harsh. The future of Malaysia is at stake.

The Malaysians who wanted to hear Dr Mahathir came for one thing. His message of hope. There was very little of that. He covered a lot of old ground. There was hardly anything new.

The session did not live up to the usual high standards of Mahathir. To be fair, it was not Mahathirâ€™s fault. He was his usual, brilliant, lucid self. His stamina equals that of a man who is 30 years younger.

The questions posed were neither challenging nor difficult. The Q & A session was a walkover.

Analogy of the talk

The analogy of Mahathirâ€™s event in London is simple. Malaysians who expected a nice, home-cooked makan had to be content with yesterdayâ€™s sandwiches. Dry bread and soggy filling. Neither exciting, nor palatable.

Was it Asian deference and respect for oneâ€™s elders that prevented the Malaysians in the audience from posing more penetrating questions about the reformed Malaysia he wants us to embrace?

Do the foreigners at the talk really know how serious things are at home? The Brits appeared to have been struck down by Mahathirâ€™s â€˜Melayu mudah lupaâ€™ syndrome, and forgotten that at one time, he advocated a policy of â€˜Buy British lastâ€™.

Questions on the Commonwealth, foreign investment and disunity in the Arab World mean nothing to the Mak Cik in Felda, or Ah Chong, the handphone accessories trader, whose business may be affected if the red shirts descend on KL.

These general questions were of little significance to the concerned Malaysians in the Macmillan Hall eager to hear his message of hope.

The crux of the Malaysian problem is corruption; corruption of oneâ€™s morals, political corruption, grand corruption, petty corruption. To bolster corruption in Malaysia, politicians use religion as one of the main tools to silence the Malays.

Some people in the audience appear to have forgotten that Mahathir, like other leaders throughout history, used religion to serve his purpose. He renamed a department in charge of Islamic affairs to Jakim. Today, Jakim is a monster with an appetite that is insatiable.

Mahathirâ€™s Islamisation process started at the time of the Iranian revolution, when PAS was making headways into the Malay electorate. Anwar Ibrahim his deputy, was recruited for his Islamic credentials as leader of the Muslim Youth Movement of Malaysia (Abim) and because he was a firebrand student leader.

The Islamisation, or rather the Talibanisation of the Malays, has gained traction in recent years, because no one, not even Mahathir, thought to put the brakes on Jakim.

The fear in Malaysia is palpable. One student told me that he wanted to ask about ketuanan Melayu, but was afraid.

No mention of the â€˜J wordâ€™

Free from the confines of Malaysia, why did the Malaysians, in London not mention the â€˜J wordâ€™?

The talk was disappointing too, because Mahathirâ€™s conversation with Wan Saiful Wan Jan, the chairperson of the Institute for Democracy and Economic Affairs (Ideas), did not materialise. Wan Saiful was relegated to introducing Mahathir. This was not what we came for!

There is one more reason for feeling short-changed. We only had just over an hour with him, instead of the two-hour session which was advertised. The opportunity for him to hear our concerns and hopes was wasted.

‘He was speaking hot air’

One member of the audience said, â€œMahathirâ€™s droning voice was like a cobra hypnotising its prey. Whilst he was speaking, I felt reassured. This was short-lived; as soon as the talk was over, I realised he was speaking hot air.â€

I donâ€™t know about the rest, but I left very disappointed. If Mahathir is leading the charge against the current regime in Malaysia, he created the impression that Bersatu lacked a cohesive strategy.

We donâ€™t want another party, which apart from wanting to oust Najib Abdul Razak, is virtually a clone of Umno Baru. We donâ€™t want a new party, â€˜Umno-Bersatu-Baruâ€™.

Many people wanted to ask questions. The event was probably just warming up.

Perhaps the deputy dean knew that controversial questions would be in the next phase, so he ended the session early. We were furious.

The decision to cut the session short was foolish. Many questions remain unanswered. The Malaysians who were hungry to share Mahathir’s vision on the â€˜newâ€™ beginning felt let down. Again!

Had I been given the chance to ask a question, mine would have been about Jakim.

Question: â€œThere is one Malaysian department which has a vice-like grip on us. It affects everyone, Malay, and non-Muslim, married or single, dead or alive. Malay women are especially affected.

â€œThat department is Jakim. With its RM1 billion annual budget, its focus appears to be on halal trolleys and the dress code. It uses the religious police to spy on unmarried couples. It fails to address more pressing issues like corruption, even the alleged corruption in mosques.

â€œIf Malaysia is to move forward, would you agree that Jakim should be shut down? If not, why not?â€

Sadly, the architect of Jakim did not have a chance to answer.