Multatuli expresses our innermost feelings about the Perak Mentri Besar, Ahmad Faizal Azumu. Read what he says, and see if his remarks resonate with yours. 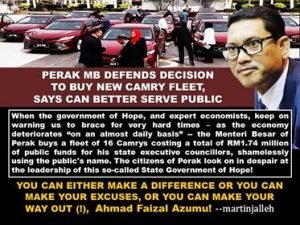 Multatuli says: Ahmad Faizal Azumu’s rant against DAP on video has gone viral. Dr Mahathir Mohamad supports his man in Perak despite this.

In return DAP forgives Ronnie Liu for his rant against Mahathir.

A tit for tat, you forgive your man we forgive ours.

And now it is alleged that Aziz Bari of DAP is plotting against Azumu.

PH is unravelling – at least in Perak if not elsewhere.

I have always said that a marriage of convenience cannot work. This is proof.

The second poorest state can do with some serious work by the politicians who we pay handsomely to manage Perak. Instead they squabble among themselves and put their hands in the till.

But let’s face it we have a dullard as MB. A dishonest dullard at that.

Dishonest because instead of dealing with one of his partners through the PH council he bitches to his old pals in UMNO.

Dull because in one breath he says the State has no money and in the next buy brand new cars for the Ex-Co thinking no one will notice.

Dishonest too on this but it is the dishonesty or greed of all the ExCo members not just Ahmad Faizal.

Dull because he cries no money but at the same time wants to build a new airport.

Dishonest because despite promises of “open tender” he awarded a huge reforestation project to a RM2 company.

Dull because who except Ahmad Faizal would think Perak can be the center of “rocket science”. How many jobs will that create? All I can say is a fool (MB) and the state land are soon parted.

Do I smell dishonesty here?

Dishonest because it has been alleged that the state road maintenance contract was offered to the same company Bujang Selenggara under a different name, Puncak Emas Infra without open tender.

Dull because he thinks no one will notice.

Dishonest and dull because the maintenance for the cleanliness of Ipoh was given to a company Bujang Holdings Sdn Bhd which has no manpower (any track record of doing this kind of work?). This company is from Johor.

Is it not stupid that while you claim your state is poor you enrich a company from another state? Why are we not supporting our own businessmen? Was open tender called?

Dishonest because his sentiments are difinitely with UMNO (“I have UMNO blood”) yet he goes to bed with the others. He’s like a man who sleeps with his wife but dreams of another woman.

If pushed out as MB, I will not be surprised if he hops back to UMNO or become an independent (same thing) together with his fellow frogs from UMNO.

Frankly it’s not all just about Ahmad Faizal Azumu.

PH is a dysfunctional party. They spend more time plotting against each other than in earning their pay.

Tell me what the other ExCos have done? What have they got to show for the money we pay them?

The people of Perak deserve a year end Report Card from the MB and ExCo of what they have done and achieved for the fat salary and perks we pay them.

We want a report card from each and everyone of the ExCo members by 31st December 2019.

From the above it is obvious who drives the gravy train.

What is Corridor Development?

Education and Islamic Education? Are we to understand that other than the subject of “Islam” they do different sylabuses? Why not Education with Islam as a subject?

And what is Attitude Development??? Hell, maybe the developed countries have something to learn from us.

To say that Perakians are not optimistic about their future is to put it mildly.

What is the alternative? Between one bunch of crooks and another what alternative is there.

Our politicians give democracy a bad name. It makes people wonder if a system that delivers is not better – whatever that system is. China has lifted 600 million out of poverty. How many has Ahmad Faizal Azumu & Co lifted – or for that matter his boss Mahathir?

Singapore seems to have found the answer – Meritocracy.

On that score Azumu should be out and probably most of his ExCo members too.