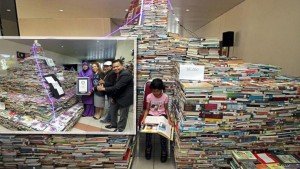 The effort, by the Perak State Library, to set a new record for the largest pyramid of books, was successful, when it beat the previous record holder, the Luxembourg bookstore chain, Ernster. Forty volunteers built a three metre high pyramid, of 70,247 hardbacks and paperbacks, and beat Enrster’s record of 63,377 books.

The director of the State library, Salbiah Mohamed, and other dignitaries including the Perak Raja Di-Hilir and his wife, the state Tourism, Arts and Culture Committee chairman, and the Ipoh mayor, were at the ceremony, in which the Guinness World Records representative, Anna Lewis Orford, announced the result, on Boxing Day.

At the official launch and run-up to setting the world record, last November, Salbiah said, â€œIf (we are) successful, we will get international recognition.â€

The attempt was made with the help of Imagika Sdn Bhd, whose marketing manager C.K. Wong said, “Not only are we attempting to break a world record, we are also encouraging people to read.â€

Wong added that as an act of charity, the pile of books, would be donated to village libraries, orphanages and children who were unable to afford them.

Come on! The large pile of books and the effort of giving it away, is not, in itself, going to stimulate people to read.

This sounds more like a publicity stunt than anything else. This is a one-off attempt. We want long-term measures to motivate people to read.

If anecdotal evidence is to be believed, the average Malaysian reads only two-and-a-half pages a year. Some people read more books than most, and may manage to read one-and-a half books a month. The majority cannot be bothered with reading.

Look at the people in trains, in doctor’s waiting rooms, or on the LRT. Very few people read books. They play on their iPhones, or just stare into space.

Only in exceptional circumstances, will a Malaysian pick up a book, and start reading. When the film censors cut whole chunks out of the “50 shades of Grey” film, or banned it altogether, people derived more enjoyment from the book. Then again, the more enterprising Malaysians, will get hold of an uncensored, pirate copy of the DVD, rather than read the trilogy.

In some pretentious households, people spend a lot of money on “coffee table books”, to impress visitors. The facade is broken when you pick up a book, and ask about the story line, only to find that they haven’t a clue.

So, rather than a big publicity seeking stunt, why not lobby parliament to get the local council to a) Have book clubs in schools b) Encourage elderly people to attend book review classes. c) Get authors to visit libraries and schools to talk about their books d) Lobby the Minister for Domestic Trade or another appropriate ministry, to reduce the price of books, e) Encourage parents to switch off the television and read to their young children, and f) instead of the tedious and mind-numbing programs on television, every morning, get the presenters to talk about books, instead of the latest fashion, government propaganda or scandal.

Most books are in English. Will the Ministry for Education promote English in schools and the community? If teachers can barely speak English, those donated books might as well be made into papier-mÃ¢chÃ© or used in place of firewood.

Ai-yoh-yoh….come on lah the learned men in the Perak assembly, “How will a large pile of books stimulate us to read? Please encourage Perakians to read…please do not encourage them to make a big pile of books…..