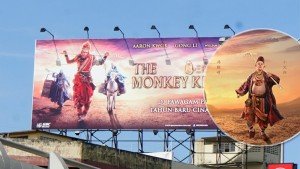 The Cabinet should be pleased. Their experiment into social behaviour has worked. The whole nation is a big experiment and we are the laboratory rats. Our politicians are the ones in the white coats.

Recently, a pig character disappeared from a billboard promoting a coming Chinese film, to herald the next Lunar New Year.

The film is about the historic monk Tang Sanzan, and his disciples, the Monkey King Sun Wukong, Sha Wujing and Zhu Bajie.

In the poster of the film, Zhu Bajie, who is part human and part pig, is to the right of the Monkey King but Zhu Bajie is missing from the billboard, on Jalan Loke Yew. The distributors had self-censored the advert on the billboard.

A similar act of self-censorship happened in January 2014. In that incident, the printing firm KHL, blacked-out the faces of pigs in a farming article, which had appeared on the front-page of the Malaysian edition ofÂ The New York Times.

The Shah Alam based firm, claimed that they voluntarily, and regularly, self-censored articles. They stressed that the authorities had not forced them to make the black markings on the faces of the pigs, and said, â€œIf there is picture of nudes or like this, we will cover. This is a Muslim countryâ€.

Last week, a Kedah housing Exco, Tajul Urus Mat Zain was outraged by the air-wells on a housing development, which looked like they were a row of crosses. The sanctimonious Muslims, in the nation, cried that this was a covert attempt to proselytize them.

So, will The Cross be banned from circulation, either as a structure, a word or a symbol? Will The Cross follow the pig, and will Malay children grow up not knowing what crosses or pigs look like? Will Malaysia be the only nation in which celebrations during the Year of the Pig are censored, or put on hold, or subdued?

The reason for Malay children being singled out is not because of religious sensitivities, but as a means of control over the Muslim population of Malaysia.

Few Muslims will dare to speak out to question a religious edict, especially when there is a risk that they will be taken away for rehabilitation.

Instead of Islam opening up people’s minds as in The Golden Age of Islam (8 -13th Century), when Muslim scholars led advances in science, mathematics, astronomy, medicine, architecture, freedom of expression and navigation, Malaysia will produce a group of Muslims, whose minds are closed, to every external influence, unless the mullahs give a dispensation.

If the ordinary Muslims do not speak out now, we will soon have a very ignorant, intolerant and insensitive generation of Malays.

There is no point in wrapping Malay children in cotton wool and caging their minds against the realities of the wider world, and its dangers.

The more we shield our children from these perceived dangers, the more we will cripple them and deny them a sporting chance at life, and all the challenges which life will throw at them.