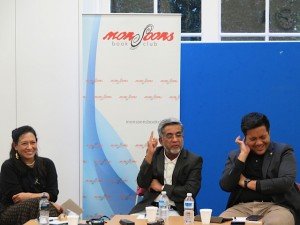 The remarks sounded like fingernails being dragged across the blackboard. They were made by a member of the audience, at a dialogue with two PKR executive councillors (exco) from Penang. The questioner was straight and candid. He did not mince his words, and judging by the nods of approval, a majority of the audience, shared his sentiments.

In a forceful voice, the man said, â€œI think you, the opposition, have missed three times. You are not able to exploit the current conundrum in the country, because you are fractured.

â€œSo, what are you going to do, in order to strengthen yourself for what has to be done? You have missed big time, because of your situation. That is the focus. How are you going to get together, and fight them?

â€œRemoving Najib (Abdul Razak) is not that difficult, if you are strong. He survives, because you are weak.â€

These sentiments must have been echoed in a similar fashion, by around 97 percent of opposition supporters, both in Malaysia and abroad; â€œNajib survives because you are weakâ€. The words must have stung, but the PKR exco membersâ€™ faces remained inscrutable.

Abdul Malik Abul Kassim (photo), the assemblyperson for Batu Maung in Penang, and one of the PKR representatives at the dialogue, said that BN/Umno Baru had conspired to engineer the disintegration of Pakatan. PASâ€™ Hadi Awang was persuaded to accept the Trojan Horse, but then PAS was cheated by Umno Baru with the hudud issue.

â€œNajib anticipated the break-up of PAS. Later, he jailed Anwar (Ibrahim). This is evident from the hasty conclusion of the final appeal.

â€œAnwar was jailed in February 2015. PAS broke-up in April/May 2015. 1MDB exploded after that. If both PAS and Anwar had been with us, we would not have got into this situation, and Najib would have been removed.â€

Dr Afif Bahardin (photo), the PKR assemblyperson for Seberang Jaya, said that PKRâ€™s analysis of rural voters shows that the rural Malays are not interested in governance, but are keen to see a credible leader from Pakatan.

He said, â€œDuring the GE13 campaign period, Merdeka Centre polling showed that, in the first week, the Malay votes were with us. In the middle of the week, PAS Mustafa Ali stated that Anwar was not a suitable PM candidate, for Pakatan. His statement caused a drop in the Malay votes, which continued till the election, and showed in the election results.

â€œDAP and PKR had no issues with Anwar, but PAS was not agreeable.â€

Abdul Malik added, â€œWe told the voters that if we win the next general election, we will hold a judicial review. If Anwar is cleared, he will be the prime minister. PKR will assemble an election team which will win the confidence of the rakyat. It will include Azmin Ali, Wan Azizah Wan Ismail and other leaders.â€

Briefly, 2008 was a political tsunami, when the grip which Umno Baru/BN had held since 1957 was broken.

2013 further weakened BN, but not Umno Baru, which gained 10 more MPs, increasing the total from 78 to 88. Najib blamed BNâ€™s dismal performance on the â€˜Chinese tsunamiâ€™.

PKRâ€™s reaction to the current crisis is bewildering. Umno Baruâ€™s rhetoric seduced PAS, so they bit into â€˜the apple in the Garden of Edenâ€™. This fruit was the hudud bill. Opposition supporters view PAS as traitors.

The most steady coalition partner appears to be DAP. So they attract criticism. Umno Baru and its thugs have targeted DAP because it of its integrity and principled stand.

Keadilan or PKR appears to be weaker than DAP, whilst PAS is like a headless chicken.

Azmin (photo), the PKR deputy president, wants to invite PAS to form the next opposition coalition. PKR wants to include the parties which are committed to the reform agenda, and to change.

Opposition supporters see Hadi as a bad leader of PAS. His intransigence, misogyny, vacillations, overruling of the decision of the PAS central committee, absence from crucial Pakatan meetings and policy making with a religious fervour, do nothing to enhance his image.

Wan Azizah has claimed that everyone, including the new PAS splinter group Parti Amanah Negara (Amanah), are welcome at discussions to form a new opposition coalition.

Hadi wants to play hard to get. He left Pakatan at the altar and has since refused to join the opposition. Despite this, PKR are still keen to include PAS.

Why should a cad be entertained? A principled PKR should show the rakyat that it has the interests of the nation at heart and not just Hadi’s affections. He is worthless.

PKR and Pakatan are currently unelectable. They must not allow sentiments to get in the way. They must pull themselves together, capitalise on the current political imbroglio and work to maintain the support of the millions of voters who oppose BN. If the voters are lost, Umno Baru/BN will have a walkover at GE14.

NB: Abdul Malik Abul Kassim and Dr Afif Bahardin met Malaysians at a dialogue, â€˜What does the future hold for politics in Malaysia?â€™ on Sept 7, 2015 in London.

This article was published in Malaysiakini on 21 Sept. 2015