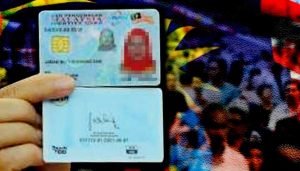 Rebuilding Malaysia is pleased to introduce Wan Nor, and her timely article, “Please Take Out the Words “Malay” and “Muslim” from my Identity Card! I’ve Had Enough!

By Wan Nor: In the following paragraphs I express my honest opinion, feelings and observations. There comes a time when you just say, “That’s it, no more”!!! Where being Malay and being muslim are concerned, in Malaysia, I think I’ve hit that point.

I’m saturated with the Malay self-entitlement that they offer themselves and force upon others deemed as Malay.

I’m appalled and disgusted at the Malay-made-Muslim religion that the ulama are forcing down our throats.

I’m sickened at seeing Pakistanis, Indonesians, Bangladeshis be ‘dyed Malay’ and then receive Malaysian Citizenship at the expense of fellow non-Malay Malaysians, who have struggled alongside us to build this country, and who, by the way, pay ~90% of the tax that becomes the National Budget.

Most of all, I condemn the Islamisation that has nothing to do with islam, a severe, malignant cancer in the form of a Malaysian-made-Islam that is led by illiterate Islamists, propagating chronic ignorance. I condemn this wave because it has brought us to the brink of extremism, radicalism and now clearly incubates terrorism.

I was once proud to be Malay. I was once proud of my Malay roots. Today, the Malays have become a toxic group of people made up of an indoctrinated majority who allow themselves to be silenced by fear of punishment, led by an indoctrinating minority of so-called ulama who subject others to oppression and suppression. Throughout my career I truly believed that the New Economic Policy (NEP) would iron out the playing field for the different races. Thus, I proudly worked hard to contribute my little bit, to make implementation of the policies impactful.

With nothing and no one to hold them back, politicians took what was supposed to be a social empowering tool, and turned Ketuanan into an intellectually lethal weapon that has crippled the Malays with a false sense of entitlement.

In all truth, below the surface of this claim to being the special ones, lies a deep set inferiority complex.

Ketuanan affects all the races

The Ketuanan epidemic did not stop at the Malays. It now has the Indians throwing themselves on the ground, demanding that they too be given special rights and gifts of entitlement to help them overcome their new-found semi-paralysis.

The Chinese, on the other hand, suffer from a different kind of syndrome that is off-set by the Ketuanan epidemic. They come out frustrated and with a false sense of superiority. This superiority complex leads them to believe that they are better than everyone else, and thus more deserving. Another face of the Ketuanan beast?

The right to mining land and related opportunities that the British apparently handed out to them, meant that the Chinese inherited a huge business edge that they skilfully transformed into a substantial financial edge, ensuring thus a spill-over edge in the education and socio-economic status of this race.

To counter the NEP, which they saw and clearly expressed as an injustice to their race, have they put in place mechanisms to ensure continuous opportunities for their people within the economic landscape? Perhaps initially, the intention was to secure opportunity for their people who were ready and able to work hard. But by locking in their race, to what extent have they locked out the other races? With all this opportunity locked in, why do I still observe such intense frustration? Why does the majority have to continue working doubly hard to make ends meet? Is their elite somehow feeding off the Ketuanan frustration, to further enrich themselves? Could it be that, Ketuanan mainly served as a diversion tactic, what the Chinese might call, Sing Tung Kik Sai, fighting the enemy that does not exist. If so then, what or who is the real enemy?

In the meantime, the Sabahans and Sarawakians seem to remain oblivious to their rights to basic amenities and education. They seem to seek to blame Malaya for their own setbacks, and the corruption that has plagued their development. Yet, they choose to remain oblivious to the fact that their own people count amongst the richest in the world. Are they blind, or do they choose to be blind? Sing Tung Kik Sai, Borneo style?

The combined effect of all these creates a ferocious monster that is now out of control. The monster is still hungry, but it has already devoured everything in its path. It has eaten up our moderate secular system, the system upon which we built progress; it has destroyed liberal expression, the basis of intellectual freedom and capacity; it has incapacitated self-actualisation thus stagnating development and progress. There is nothing left, and the monster is now on a rampage. The inter-racial socio-economic gap is growing. Inter-racial harmony is failing.

The fall is going to be a hard one, for all Malaysians, even those who feel that it is time to leave Malaysia. We now need to ready ourselves, in order to be able to piece the broken pieces together and to get through this, as a nation, a nation intact, one people, Bangsa Malaysia, undivided by religion or race. We can’t be Malay, Chinese, Indian, Sabahan or Sarawakian anymore.

I haven’t given up on Malaysia. No, not just yet!

More on the contributor, who writes under the byline, “Hard Questions By Wan Nor”.

She has served in the Malaysian public, private and non-profit sectors in a number of university and ministerial functions. She brings to her written pieces, academic and intellectual depth; and, experience in state and national-level programmes.

Driven by her commitment to Malaysia, and held by a deep sense of integrity, she constantly seeks workable solutions for Malaysia at a time when the ordinary Malaysians are submerged under politico-economic events that seem to challenge their ability to just forge forwards in this climate of uncertainty and, at times, hopelessness.