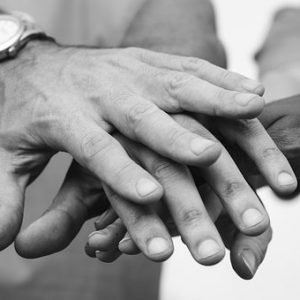 Stephen says “Malaysia has a historic opportunity to build a truly multi-racial secular country so that every Malaysian is equal before the law.” 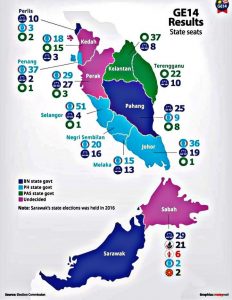 Stephen: “The confirmed results for the 222 Malaysian parliamentary seats are:

After 61 years and winning 13 elections (by foul means) the ruling BN has suffered a historic defeat by a coalition of opposition parties under the umbrella PH.  While it is a great victory the margin of seats won by PH of 113 out of a total of 222 seats is small. However with the support of Warisan’s 8 seats PH should be able to govern with stability.

This is truly a turning point for Malaysia.  From today Malaysia has a historic opportunity to build a truly multi-racial secular country with Islam the religion of the majority of its people.  Our elected representatives have the responsibility and challenge to ensure that social justice, equal access to opportunities in every field and compassionate welfare provisions for the less fortunate are available to all Malaysians, and every Malaysian is equal before the law.  From today we should all strive to be Malaysians – not Chinese Malaysians or Indian Malaysians or Malay Malaysians etc. We are all Malaysians!

The road ahead to create a harmonious and prosperous Malaysia will be long and hard with many pitfalls.  UMNO & BN have been defeated but not wiped out – the snakes have not died but crawled on their bellies to hide themselves in the long grass waiting for opportunities to spew their poison.

Dr Mahathir Mohamad deserves credit in playing a major role in bringing  down the BN government led by UMNO.  But we must not forget that amongst Mahathir’s clique are many former BN, especially UMNO, top brass.  These are the serpents that the people must be on guard against.  They have sold their soul and mother, betrayed Malaysians for decades for 30 pieces of silver when they were part of BN’s (led by UMNO) establishment.  These serpents could sell their soul, mother and Malaysians again, and this time for a different price.

The strategic interest of Malaysia and the prosperity of its people are dependent on its ability to trade peacefully with emerging economic powers in Asia – China, India and Indonesia as well as industrially advanced Japan.  To do so, Malaysia foreign policy should be that of a truly non-aligned nation.

Anwar Ibrahim served in Mahathir’s cabinet from 1983 to 1998 and was Finance Minister from 1991 to 1998, and Deputy Prime Minister from 1993 to 1998.  To further his political ambition he became very close to the Washington neo-cons from the early 1990s and received political support from the neo-cons including following his release from prison in 2004.

The Mahathir and Anwar spat

A major reason for the fallout between Mahathir and Anwar was that Mahathir was against Anwar’s move to involve his friends and backers, the Wall Street neo-cons, to “rescue” Malaysia during the 1997 Asian financial crisis – allowing banks (with the support of Wall Street) to protect themselves, implement severe austerity programme in Malaysia and allow major corporation to fail and be “rescued” by Wall Street.

This would result in Wall Street taking over for a song most of the Malaysian major corporations owned by Mahathir’s cronies and frontman.  This would deplete Mahathir’s financial base in favour of Anwar’s backers, the neo-cons.

Washington’s neo-cons are neo-liberal hawks who advocate the use, where appropriate, of subversion and confrontational foreign policies, from armed intervention to subversion of democratic process and financial takeover of sovereign countries to further the interest of the US.

The US have been for decades working to build a solid alliance of anti-China in the Pacific region so as to maintain and enhance the US neo-imperial design, and is desperately looking to consolidate its anti-China allies in Southeast Asia.  Malaysia will be a golden prize to Washington’s neo-con as an anti-China ally.

Mahathir has always been suspicious of Western neo-imperial intent as reflected in his look East policy when he was Prime Minister. However, in his “Look East” policy his lost sight that Japan is, in terms of geo politics, a tool of imperial US.

Mahathir made negative statements on China, a strategic trading partner and global economic power  because of China’s dealings with the BN government.    He seems to be unaware of China’s foreign policy based on the five principles of peaceful coexistence: mutual respect for sovereignty and territorial integrity, mutual non-aggression, non-interference in each other’s internal affairs, equality and mutual benefit, and peaceful coexistence.  Arising from this, China will deal with the government of the day, of any country. This does not imply China’s approval or support of the government of the day.

We should note that there were deadly serpents (Malaysians of Chinese descent acting as tools of Mahathir), within the opposition during the election campaign, who were poisoning the minds of Malaysian, especially Malays, to be anti-China  by making claims that China, through the Communist Party of China (CPC), is bringing communism to Malaysia through the CPC so-called close association with MCA; and that China is colonising Malaysia through their infrastructure projects and loans to the UMNO led BN government.

This is the worst form of sinister use of race and gutter politics that should have no place in Malaysia.  This black propaganda plays into the hands of those in Malaysia who wish forge closer ties with Washington at the expense of China which is detrimental to the strategic interest and prosperity of Malaysia.” 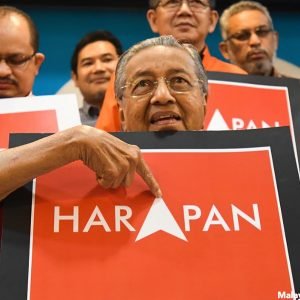 Stephen Chang is a Malaysian who is passionate about what happens in the country.