You will probably disagree, but the event was good for the nation. For decades, we lived in denial, allowed politicians to serve their interests, closed one eye to racial and religious domination, and condoned bad behaviour in our politicians.

Sunday’s political turmoil, closely followed by PM, Dr Mahathir Mohamad’s resignation, was the kick that we deserved to have.  It gave us a chance to take stock of the situation, and improve our political knowledge. 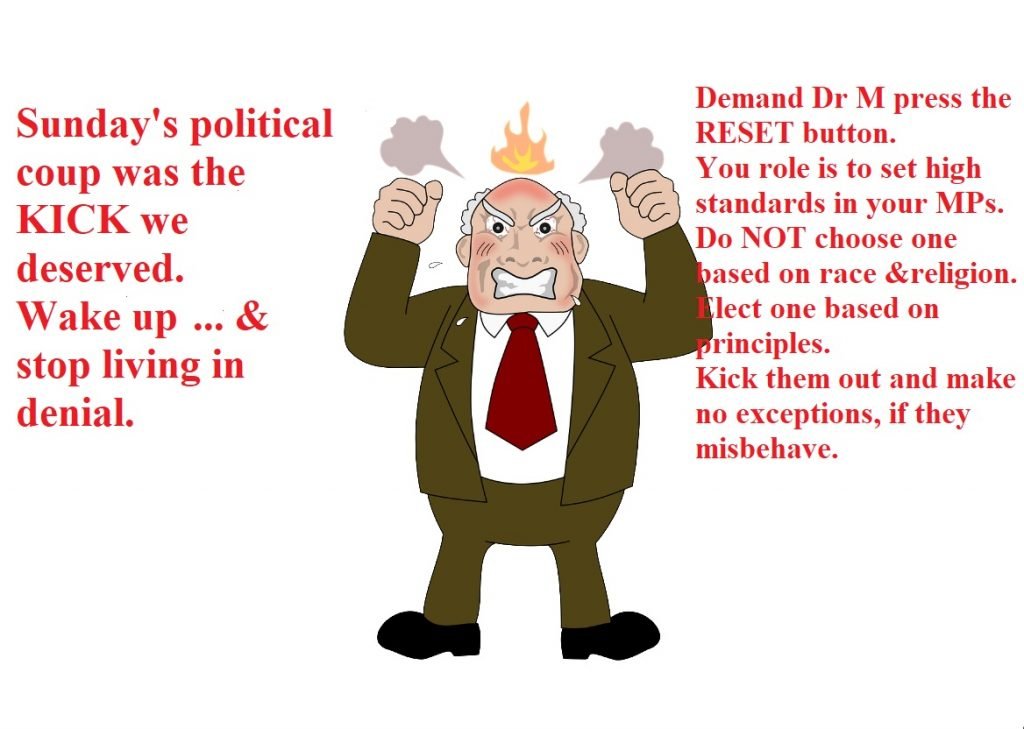 First. A proviso. I have been Mahathir’s fiercest critic since my teens, but today one has to admit that in one fell swoop, he achieved many things.

I disagree with some of Mahathir’s methods and I despise his continual use of affirmative action policies; however, he taught us (indirectly) that we should scrutinise the role of the politician, and the disconnect between us and them.

Some politicians underestimate a master tactician like Mahathir, and think that they have got the better of him. They have not.

Mahathir keeps things close to his chest and is inscrutable. He may deny any knowledge of the plots and subplots, and he will ensure that the mud is on other people’s faces, not his.

He may be hopeless at choosing a successor, but he is skilled at surviving the political jungle.

He may, or may not have been a part of the rebels’ plan, but he has emerged more powerful than ever.

The nation gave Mahathir a mandate to lead Pakatan Harapan at GE-14 and to clean up the mess, the seeds of which were firmly planted during his first tenure as prime minister, in the 80s & 90s, before his resignation in 2003.

The greedy, power hungry, desperate and impatient politicians should have just performed, and got on with their jobs. If they had delivered, we would have re-elected them at GE-15. Instead they plotted, and counter plotted.

Winning GE-14 has probably made some politicians arrogant. Instead of serving our needs, they expected us to serve their personal interests.

The MP who failed to visit his constituency despite their  repeated pleas to resolve the air, soil and water pollution from the burning of plastic waste which was dumped at a river-mouth in Kedah, comes to mind. Come GE-15, this politician will be remembered for his absence.

We should be more responsible when electing our MPs. If they don’t perform and if they misbehave, we should punish them by kicking them out of office. Having high standards and not making exceptions will improve the quality of their service to the nation.

The disconnect between the electorate and politician serves to remind us that we should be more responsible when electing our MPs. Decades of brainwashing have scared us, and we fail to think what is best for the nation.

We should elect an MP because he has integrity and is principled. Not because he is of the same race. Race and religion have cursed Malaysia.

Prime-minister-in-waiting, Anwar Ibrahim, was a major contributor to Sunday’s events. He was a distraction. He should have learnt his lesson from the failed Kajang move of 2014, but instead he promptly engineered the Port Dickson by-election. Subsequent press reports would mostly be about his succession, and he failed to explain how he would make Malaysia progressive.

Becoming the PM is not his birthright. He must prove himself. His allegiance should not be to his supporters, but to the rakyat.  His supporters may have brokered a deal, but they forgot to ask the rakyat.

His words and actions have exposed  Anwar’s unsuitability for holding the office of PM. He would put himself before the country and before the rakyat.

The minister in charge of Economic Affairs, Azmin Ali, was another major distraction and major contributor to last Sunday’s attempted coup. Firms are going bankrupt and selling their premises. Ordinary people are struggling to make ends meet.

What incentives has Azmin offered to budding young entrepreneurs? How has he stimulated manufacturing and growth? Foreign investors are appalled by our corruption, and our obsession with race and religion, so they bypass Malaysia to invest their money in Cambodia and Vietnam.

The world economy has taken its toll on businesses in Malaysia, and Coronavirus will add to the burden. Many components are manufactured in China and the Coronavirus outbreak has caused many companies to decrease productivity as there is a shortage of parts.

As the prime mover in Sunday’s turmoil, Azmin is now a political pariah.

Umno-Baru was wiped out in GE-14 and some of their accounts frozen. In other words the gravy train ran dry. Their politicians supported Sunday’s move in the apparent belief that they could restore their lost fortunes, and perhaps overturn the judgements which will be made upon their members who are currently on trial for corruption, criminal breach of trust and money-laundering.

Had Mahathir accepted Umno-Baru into his fold, he would not recover from the rakyat’s backlash.

PAS is not really worth mentioning, but their  expertise can be called upon to scare the Muslims to vote for Umno-Baru/PAS, to “defend the Malays and protect Islam”. A blind eye is turned for corruption.

As a bonus, Sunday’s events have exposed those who are part of the “Deep State”, a cadre which has been used to scare us into inaction.

The important questions you must ask

Now is the time to move forward. Sunday has been a blessing in disguise.