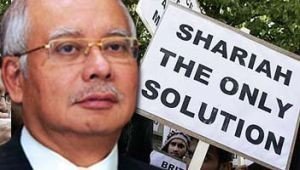 There are extremists in all religions, but the government of Najib Abdul Razak panders to the Malay and Muslim extremists, who are busy fanning the fires of false victimhood.

Don’t they realise that people who play with fire, will get their hands burnt?

Najib claims to be learned and well-travelled, but he allows bigots in his party and its associated groups to proclaim that Islam needs protecting in Malaysia. The extremistsâ€™ battle cry is that Malays are victims in their own land.

With all the money thrown at the Malays, the perks, the business models and the pro-Malay government policies, how come they are still victims?

Why should Islam be under threat when mosques are popping up on every corner, religious study time is increased, a religious dress code enforced, attendance for Friday prayers is a must, and the moral police spying all the time?

Halfway across the world, in Paris, terrorists killed around 17 cartoonists, policemen and innocent people because of the terroristsâ€™ failure to appreciate freedom of expression. Hating the cartoons, however distasteful they may be, does not give the terrorists a licence to kill.

Back in Malaysia, a team of small-minded and ignorant people, comprising Muslim and Malay extremists, some of whom are judges, have used the Federal Court to ban the word â€œAllahâ€ from being used by the weekly Catholic publication, Herald.

Banning Allah from being used by the non-Malay Christians goes against the Constitution. All Malaysians â€“ except for Malays, ironically enough â€“ enjoy the freedom to practise their religions.

What happened in Paris and what is currently being experienced by Malaysians is about a group of punitive people who have hijacked Malaysia to further their aims. They crave power. Similarly, the â€œAllahâ€ debacle is not about Malay ownership of the word. This issue is also about power â€“ political power.

The court ruling has also exposed the weakness of the Malays and shown that Islam, as it is practised in Malaysia, is as heinous as the most puritanical, rigid, and regressive interpretation of Islam as exhibited by the Wahhabis. (Please read my MalaysiaKini article (25/01/16) to show how Saudi oil money, which is “donated” to masjids, madrasahs and schools, are used in a form of “You help me, I help you” -)

In Wahhabism, other Islamic divisions are frowned upon and their holy sites and tombs of historical significance destroyed.

In Malaysia, the form of Islam promoted by our religious authorities and so-called ulamas are similar to the punitive Wahhabi movement, albeit to a lesser degree, at the moment.

At times, it appears that there is a hidden understanding that certain words should be banned from use by non-Muslims and that the holy sites and holy books of other religions should be destroyed. Temples, churches, holy books and congregations have all been treated with contempt.

Islam as practised in Malaysia is not the Islam of our forefathers. Todayâ€™s Made-in-Malaysia Islam has strong undercurrents of anti-Semitism and promotes misogyny.

On the streets and in schools, very few people understand what it is they are being anti-Semitic about, apart from toeing the government line.

Converts of this puritanical, extremist form of Islam advocate that women should stay at home and care for the family.

How can single women, girls who have been orphaned or single mothers, support themselves and their families if they have to stay at home? They cannot depend on the Malaysian welfare system. Some may become prostitutes.

The other plausible reason for banning Allah is to foster the unwritten policy of the Umno-Baru party, which is to divide and rule the people.

The three â€œRsâ€ of race, religion and royalty, are powerful tools for Umno-Baru. Despite allegations of corruption, abuse of power and criminal acts, any criticism will result in the critic being charged under the Sedition Act.

The usual bogey of May 13 will be used to instil panic and fear in the public, but the government now has another card up its sleeve â€“ the word â€œAllahâ€. Allah will be convenient when leaders need to whip up public sentiment.

Sadly, the word â€œAllahâ€ will be used to unite the Malays in times of government crisis.

The shame is that most Muslims in Malaysia know very little about their religion or that Allah was used in reference to God for thousands of years before Prophet Muhammad.

The regret is that the Malays are too weak to rally against a government which has emasculated them. The protection of the word â€œAllahâ€ is not about acquisition or ownership. It is only about hanging on to power.