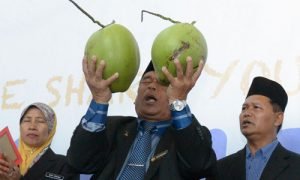 When Raja Bomoh, whose real name is Ibrahim Mat Zin, announced his intention to enter politics in Bagan Datoh, many people breathed a sigh of relief.

Malaysia’s internationally renowned shaman has told reporters that for the past seventy years, he has been instrumental in protecting Malaysia from harm.

The Americans have their Captain America and the other Super Heroes, like Superman, Batman, Iron Man and Wonder Woman. Malaysians are a practical bunch, and extremely cost conscious. We have Raja Bomoh.

Many men admire women who can juggle several tasks at a time. Like the self-styled, FLOM. She is a housewife, a fashion show organiser and wannabe singer. She has represented Malaysia overseas, when the PM is busy, balancing the accounts.

Najib is also good at multi-tasking. He doubles up as our Finance Minister. He claims two sets of wages, but not two sets of taxes. 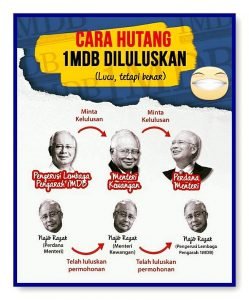 We have various ministers, whom we know hold down two jobs. They are ministers by day, and one is a nasi goreng seller by night. Another is a cottage garden trader. 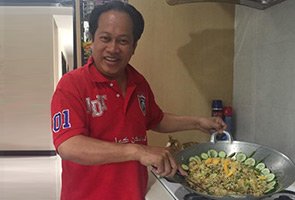 When commuters are stuck in traffic jams, one minister, who lives close to his office, is busy pottering around in his vegetable patch, and gives the produce to his community. Our ministers have two jobs or more, because they are not as extravagantly paid as ministers in Singapore.

Raja Bomoh would be good for Malaysia. He could also act as the Defence Minister. We need not spend a fortune on Exocet missiles, submarines, or expensive weaponry. There will be no need for hundreds of millions of ringgits in commission, to be given to middle-men, like in the Scorpene submarine purchase.

As Raja Bomoh can peer into the next realm, with his bamboo telescope, our current armed forces, can dispense, with the expensive and ineffective radar and technology, which keeps breaking down. 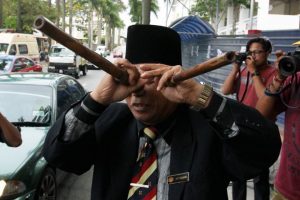 We pour billions of ringgits into ESSCOM, the Eastern Sabah Security Command, but every week, Bugis pirates walk unchallenged into Sabah. We can repel these pirates, with Raja Bomoh’s help.

Raja Bomoh’s magic carpet, can travel through a parallel dimension and is far superior to the multi-billion dollar, American Stealth bomber. Radar cannot detect Raja Bomoh’s flying machine, nor is he affected by fluctuations, in the cost of fuel.

When Raja Bomoh said he would stand for election in Bagan Datoh, the incumbent MP, Zahid Hamidi, was petrified. It’s like a mere mortal, standing against Dumblebore.

The locals are happy. Even if he makes a lousy Defence Minister, Raja Bomoh, can double-up as the Tourism Minister, and replace Nazri Aziz.

Raja Bomoh will be a major tourist attraction and bring more jobs and money, to Perak. He has the magic touch.