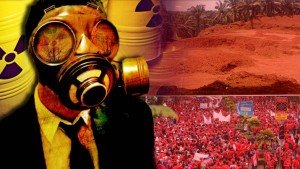 There is another red threat, that is more insidious and more damaging to Malaysians. This red threat does not come from the communists and it is not the menacing thugs called the “Red shirts”, whose job was to distract us from the 1MBD scandal and the RM2.6 billion donation, which ended up in Najib’s personal bank account.

Far away from the seat of government, at Putrajaya, and around 50 km north of Najib’s constituency, of Pekan, is the town of Kuantan. Close to Kuantan is Felda Bukit Goh. Here one can see the disasters caused by the combination of man’s greed, and ignorance. Eventually, we will witnessÂ  man’s downfall from apathy and selfishness.

Poor Kuantan. Its inhabitants still have to contend with the debilitating effects of the radioactive waste, from the Lynas Rare Earth Facility. Now, they are being hit by damage to the environment, their health and the tourist trade. The source of this latest misery is an aluminium ore called bauxite, the main component of which is aluminium hydroxide.

Bauxite is reddish, or pale orange. The ore also contains heavy metals such as mercury, arsenic, cadmium, beryllium and also radioactive uranium and thorium. The ore is mined for its aluminium content but extracting bauxite, can seriously damage one’s health.

The minerals can trigger cancer, if it is ingested or enters one’s air passages. It can block the lungs and cause respiratory disease. The elements can, and do, enter the food chain. People who eat fish, which live in contaminated waterways, will be poisoned by these toxins.

Bauxite is used to make aluminium. The workshop of the world, China, needs aluminium. It cannot get enough of the ore. The problem started when Indonesia banned all exports of raw bauxite. It is not surprising, that Malaysia filled the Chinese need. Suddenly, illegal mines sprouted everywhere. There was little regulation and, as is common throughout Malaysia, the authorities simply do not care.

Pahang Chief Minister, Adnan Yaakob claimed that shutting down the mines was not an option because the industry is “a large source of employment” for the transport trade, workshop owners, and small hawkers which ply their trade, around the mines.

Despite numerous complaints about the unregulated mining, and the lack of enforcement and control by the authorities, Adnan said, “The problem is caused by the operators and lorry drivers who do not adhere to the regulations.”

The consequences of Adnan’s irresponsibility are far-reaching.

With scant regulation, even the Felda settlers were gouging the land, uprooting their oil palm trees, to remove the ore and dump it into lorries, which take them to the port, at Kuantan. The lorries, which travel through residential areas, leave a red trail of bauxite laden earth. Homes, the grass, trees and shrubs are given a reddish tinge. Even the waters surrounding the port, are alleged to have turned red.

Where the land was excavated, red sludge, and surface run-off washed the soil into the rivers, thus contaminating the water. The proof of contamination and the pollutant is the colour of the river. It is red.

The red threat from bauxite, which affects the people, especially in Kuantan, will never be solved, unless the government is more proactive and commits itself to caring for the people and the environment. Lip service alone will not get rid of the radioactive pollution.

It is alleged that some villagers make thousands of ringgits per lorry-load of earth. Some greedy villagers try to sell several lorry-loads per day; but at what cost to the health of their children?

Published in TheAntDaily on 2 October 2015