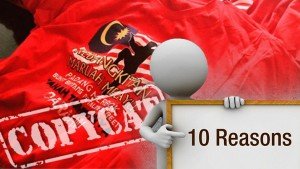 The Malays have been issued with a rallying call by Umno-Baru poster boy, Jamal Yunos and former Malacca Chief Minister, Ali Rustam with their call to defend Malay honour in the Red-shirt rally of 16 September.

This rally has nothing to do with Malay honour. This is rally is a devious plan, to show support for Najib Abdul Razak.

What honour is there, in a rally which espouses racial sentiments and threatens violence towards the non-Malays?

What honour is there in the rent-a-mob which is bused in from the rural areas, given pocket money and meals for “supporting” the Red-shirt rally? It is highly likely that Najib and the Umno-Baru machinery has used taxpayers’ money to fund this despicable scheme.

What honour is involved, when Army Veterans have been invited to join this rally? Our recollection is that the Army Veterans showed their butts in front of former Bersih Chairman, Ambiga Sreenevasan’s house on a daily basis and set-up beef burger stalls to insult her. The police did nothing!

A former armed forces officer, a Malay, who was on active duty during the Emergency and served in the jungle during Konfrontasi, told me, “The Army veterans who performed the butt dances in front of Ambiga’s house shamed everyone in uniform. The Malays have no dignity nor honour!”

Today, Najib’s response to the rallying call to defend Malay honour is his precious silence!

A man of honour and integrity would have sacked Jamal and Ali for tarnishing Umno-Baru’s image. But then the image of Umno-Baru was tarnished for over four decades .

Najib should have resigned ages ago, to save his country. Staying on has dragged Malaysia into the gutter.

Please read my take on the Red Shirts rally in this article, in TheAntDaily