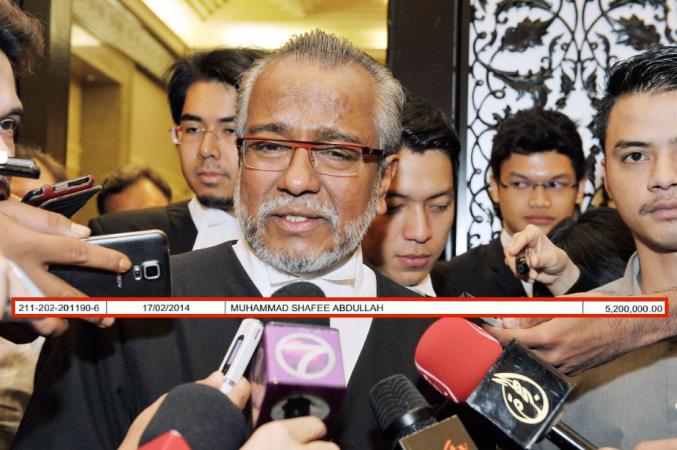 When someone makes a serious and damning allegation about you, wouldn’t you deny it, especially if it were not true?

A lawyer, who is supposed to uphold the law, is suddenly accused of receiving a hefty payment. If he has nothing to hide, you would expect him to say “No!”, especially as his reputation and professionalism are at stake.

You would not expect him to keep quiet, or delay answering the question. What is wrong with a plain “Yes” or “No”?

This is what happened to Muhammad Shafee Abdullah, the chief prosecutor who successfully helped to put former Opposition leader, Anwar Ibrahim, behind bars, in the Sodomy II trial which was held on 10 February 2015.

Last week, Sarawak Report (SR) claimed that Shafee had received RM9.5 million from Najib Abdul Razak, despite parliament being told that his fee was only RM1,000 .

When all hell broke loose, with the SR revelation, the rakyat’s fears that Anwar had been a victim of political conspiracy again made its rounds in the public sphere.

Shafee was nowhere to be seen, and we were told he was on sick leave. Neither he, nor Najib issued any statements, when contacted.

Today, at the Jalan Duta Court Complex in Kuala Lumpur, reporters questioned Shafee about the RM9.5 million, which was deposited into his account in two tranches. Once on 11 September 2013, and the other, on 17 February, 2014.

Shafee said, ‘“I will issue a statement, but not today,” before jumping into his car and speeding  away.

One political observer said, “His and Najib’s deafening silence speak volumes. The court of public opinion has decided that they are guilty. Shafee is a fool to buy time by saying, that he will issue a statement later. The public now believes that a script is being prepared.”

Political aide, Teoh Beng Hock was found dead on the fifth floor of Plaza Masalam, Shah Alam on July 16, 2009. He had been questioned overnight by the Selangor Malaysian Anti-Corruption Commission (MACC) over irregular disbursement of state allocations by his employer, Ean Yong Hian Wah, a Selangor exco member and Seri Kembangan state assemblyman.

Despite Ean Yong having been cleared of  allegations that he abused funds, Teoh was nevertheless, summoned to the MACC office.

On 5 May 2011, during the Royal Commission of Inquiry (RCI) into Teoh’s death, the MACC lawyer, Muhammad Shafee Abdullah suggested that Teoh could have taken his own life, choosing “death before dishonour”.

Shafee suggested that Teoh was under severe pressure and afraid of being “uncovered”. He said,  “…he would probably have committed suicide, as an honour suicide to protect Ean Yong and DAP. As the Chinese proverb goes ‘death before dishonour’.”

Look who is being dishonorable

Six years later, it is Shafee who is a disgrace to his profession, by refusing to answer the SR allegation, that he had recieved RM9.5 million from Najib. The Prime minister has every reason to make sure, that Anwar is safely locked up.

Teoh was killed over an allegation about a paltry RM2,400.

Shafee kept quiet over an allegation of RM9.5 million.

Was this money used to make sure that Anwar will be jailed?