Has disgraced ex-FLOM, Rosmah Mansor, ever heard of Hosni Mubarak, the disgraced former president of Egypt?

Or Joseph McCann, the serial rapist from England?

First. In 2011, the much hated 83-year-old Mubarak was wheeled on his hospital bed, into a cage in court, at Cairo’s police academy, to face corruption charges, and other charges related to abusing his power. Days earlier, his lawyers claimed that he was in a coma.

So, others who claim to be too ill to attend their trials, should expect the same treatment. 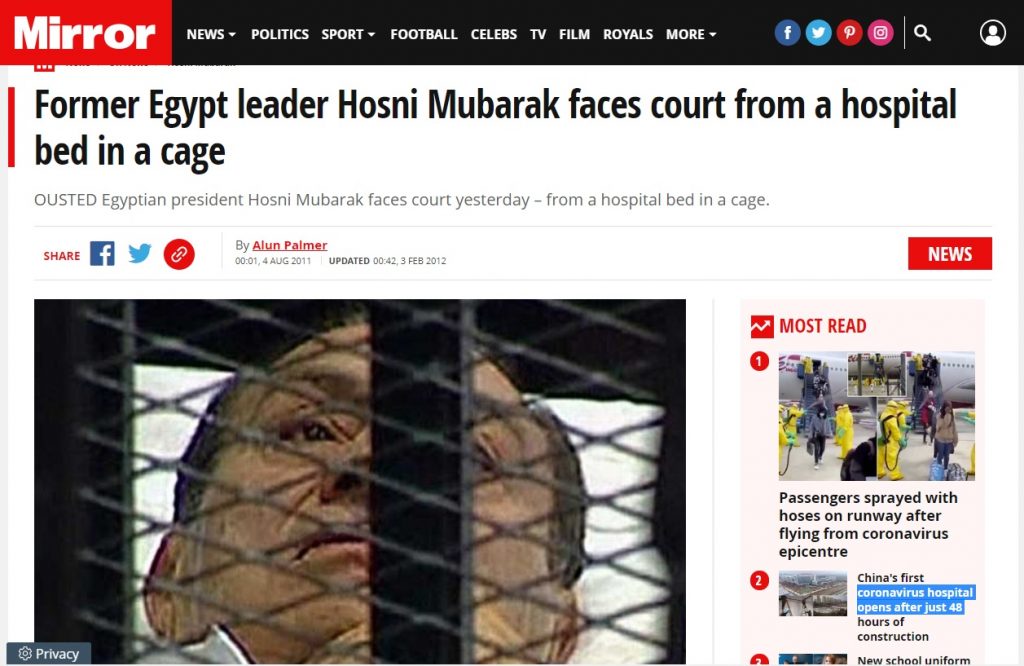 Second. In November 2019, 34-year-old serial rapist, Joseph McCann, refused to face jurors in court, and just cowered under his blanket in his prison cell. There were several adjournments, and wasting the time of the court, jurors, prison wardens, police and reporters. More importantly, he added to the grief of his victims. All they wanted was justice.

McCann’s refusal did not deter the judge. She took the unprecedented step of conducting the hearing in McCann’s cell in Belmarsh prison. 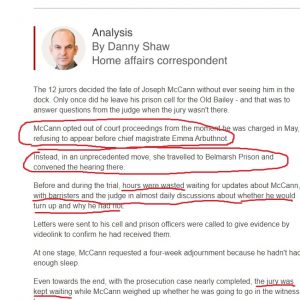 A month later, McCann received 33 life sentences with a minimum term of 30 years.

Justice will be served

Disgraced Rosmah, and her equally disgraced husband, Najib Abdul Razak, should never forget that justice will be served, albeit at a snail’s pace in Malaysia.

When the two were in power, they criss crossed the world, at our expense. On a private jet, which the Malaysian taxpayer paid for, she went several times overseas, giving speeches on behalf of her hubby or the Malaysian government, we could never be sure. She went to Monaco and Monte Carlo and London to promote Islamic fashion.  She visited Oxford and Cambridge ostensibly to promote her Permata program.

The list of overseas trips which she made, either on her own, or with hubby, is exhaustive but not once, did she complain of dizzy spells, or dodgy knees.

Rosmah and Najib made friends with the rich and mighty. Her handbags and luxury watches draped round her pudgy wrist, were the envy of many.

Rosmah’s trips on private jets and yachts were legendary. Scenes of her climbing the staircase, unaided, to board a private jet, stuffed with her suitcases, bound for Turkey, are still fresh in our minds, but yesterday, she could not even make the short trip to the High Court to be tried on corruption charges.

The Medical chit (MC) which was shown to the High Court judge, Mohamed Zaini Mazlan, said that her dodgy knees, dizzy spells and illness made movement difficult.

Her lawyer (and wannabe doctor), Jagjit Singh, presented us with a laundry list of all her ailments. These are common health problems for obese people, or the over 60s who lack regular exercise.

Rosmah and her legal team know they would not be believed, so Act two, Scene One of “Emergency Ward 5” was scripted.

Malaysians had reacted with outrage at her “auta”, so a leaked photo of Rosmah lying on a hospital bed, being comforted by an adoring husband, by her bedside, only invited more scorn.

One social media user said that it was bad acting as she forgot one detail. “Nobody wears a jogging jacket lying on a hospital bed.” 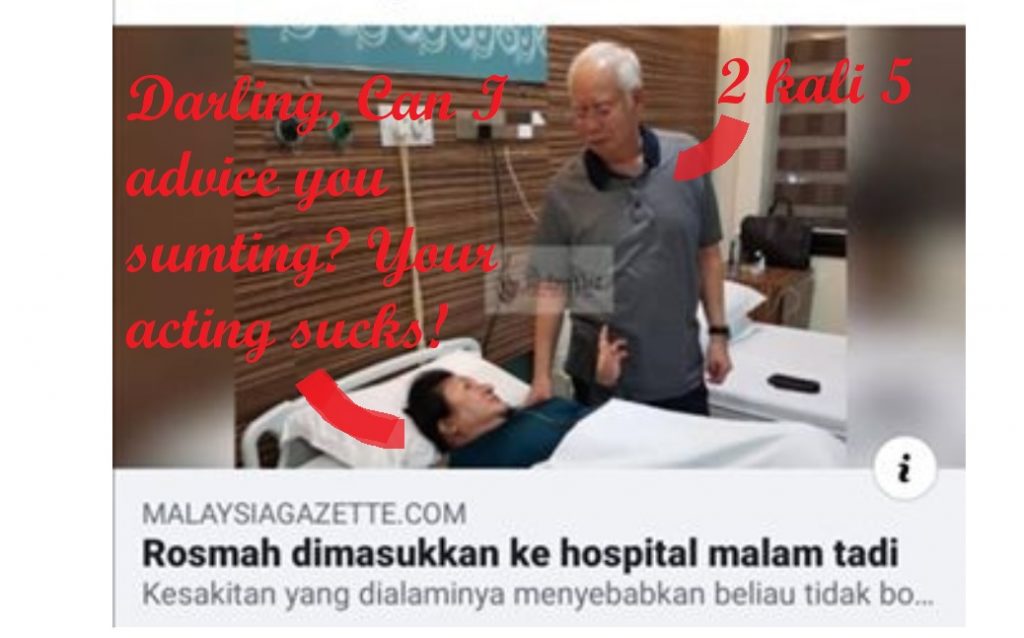 Another person said, “Whenever I see those two together, I can only hear Rosmah screeching “Can I advise you something?”. He was referring to an audio recording which had been released by the MACC in which Rosmah had screamed at Najib.

The following day, another leaked photo of Rosmah on her hospital bed, surrounded by five people was released. 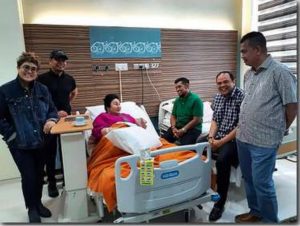 Her lawyer, Jagjit Singh, had consulted Doctor Google, and declared that Rosmah’s condition was “life threatening”, but we remain suspicious.

What does Rosmah want? Our sympathy? She is afraid of going to court, and being grilled by the prosecution, and the world’s press. That’s why she pretends to be ill.

Najib once admitted, “Cash is King”. Money bought this couple influence, favours, and enough Birkin Hermes bags and luxury watches to fill several apartments, but all the money in the world, cannot buy the rakyat’s respect.

“Can I advise you sumting, Dateeeeeen?”

Destress yourself. Attend court, bring your pills and your custom-made motorised leather seat wheelchair, which will match whichever handbag you decide to carry.

Just get it over and done with!

BTW, it is not arthritis that Rosmah suffers from, it is “auta-ritis”.

(i) Rosmah is facing three counts of corruption involving hundreds of millions of ringgit. On 15 November 2018, she pleaded not guilty to two counts of soliciting RM187.5 million and receiving RM1.5 million for projects to provide solar energy to rural schools in Sarawak.

(ii) Wad 5 is in Tanjung Rambutan.