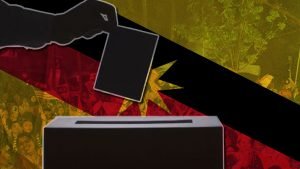 True development does NOT mean you open-up land, for exploitation by timber merchants and then converting the land into oil palm plantations.

This is short-term gain for maximum profit. It is not sustainable development.

Sarawak has exported oil for over 100 years. How much of this oil money reached the average Sarawakian citizen?

Successive chief ministers have failed to convince Putrajaya, to amend the Petroleum Development Act 1974. Why?

Why can’t you divert most of the oil royalty to the people of Sarawak?

Petronas was formed in 1974. After this, both Sabah and Sarawak received a meagre 5% of oil royalty. How come? It’s YOUR oil.

For decades Sarawak was ruled with an iron fist. Certain families have become obscenely wealthy from the corrupt practices of those who abused their power when they were in government.

The indigenous people lost their ancestral lands and with the construction of the mega-dams, were forced to relocate to areas far from their homelands where they were unable to sustain their way of life.

If BN is not scared, why ban Opposition politicians?

Most people do not wish to see further destruction of the rainforest, and the resultant, alarming decline of the lives of the indigenous people.

Both BN politicians and Putrajaya have managed to divide the Sarawak people. A lack of infrastructure has isolated villages. An inadequate provision of good schools and teachers, combined with low standards in education, have kept people uninformed and ignorant.

Why believe the same promises about completing the Pan-Borneo Highway? Why ignore the maintenance of the parts of the highway which have already been completed.

Is Chief Minister Adenan SatemÂ  blind? Can he not see the land-grab issues, the poverty of the people, the lack of medical facilities and teachers, inadequate water supply, lack of provision of electricity and the lack of concern, by the authorities, towards their well-being?

Why believe Putrajaya when every five years, the BN politicians make the same promises.

Do not allow BN politicians to steal from the Sarawak people.

You need a free and open society.

You need to be free to question and criticise politicians.

You are the best check on political corruption.

You know that politicians need your vote. So make them do work. Do NOT let them steal from you.

Adenan tells Sarawakians that Prime Minister Najib Razak is a friend of Sarawak?

Friend? What friend tells them they cannot increase the oil royalty. It is your oil.

BN fears the end of BN rule in its colony – Sarawak.

If BN rules Sarawak, BN will continue to fleece the Sarawakians and plunder Sarawak.

And you know what? With Sarawak under their control, BN can continue to plunder Malaya.

If BN is good for Sarawak, what happened to the billions of ringgits from Sarawak oil, timber and LNG exports?