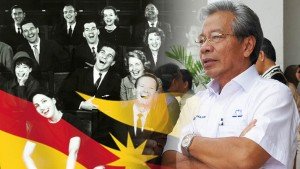 Sarawakians do NOT want foreign workers. So why did Dr James Masing says the Sarawak stateÂ  government is still accepting applications for foreign workers? Who does he represent? The Sarawak people or big corporations?

Putrajaya made a U-turnÂ  on the 1.5 million Bangladeshis workers following a public outcry.

This is the Press Statement by Human Rights Advocate, Peter John Jaban aka “Papa Orang Utan”:

There has been public outcry against the hiring of more foreign workers in Malaysia; so much so, that Putrajaya was forced into an embarrassing U-turn on their proposal to bring in 1.5 million migrant workers from Bangladesh. Yet Land Development Minister James Jemut Masing still wants to disregard public opinion and Putrajaya and continue to bring them into Sarawak.

His rationale is that: â€œWe need foreign workersâ€.Â  However, this begs the question: who is we? Is Dr Masing referring to the people of Sarawak, or to the small handful of plantation owners with whom a number of State Government ministers are alleged to have links? Since the local people, in all other respects considered among the most welcoming people on earth, do not seem to want them, then perhaps it is the former rather than the latter.

Dr Masing states that the plantation sector already employs 78% overseas workers, a clear admission that the sector is doing very little to uplift the rural residents in any way whatsoever, providing minimal employment prospects while being implicated in the widespread loss of their ancestral lands. His rationale is that Sarawak workers are unwilling to do jobs that are â€˜dirty, difficult and dangerousâ€™ and therefore the plantation sector stands to lose RM 1 billion each year in unharvested fruit.

This is the heart of the issue â€“ it all comes down to money.

Plantation companies want to maximize already sizeable profits by reducing employment costs and, in time-honoured tradition, this can be achieved by using cheap overseas labour. In fact, there are numerous reports of Indonesian workers being lured to Sarawak by promises of salaries in the range of RM2,000 per month for driving work who arrive to find themselves laboring up to 12 hours a day for a minimum wage of RM800 per month or even less.

Is it surprising that local workers do not want the same treatment? Is it ridiculous for them to expect a living wage and reasonable working hours?

With RM1 billion of uncollected fruit, is it not acceptable to expect plantation companies to distribute some of their potential profits throughout some of the communities that they are imposed on? That would be rural development.It is this mentality of â€˜profits at any priceâ€™ that has seen Malaysia on the lowest rung of the human trafficking ladder.

Sarawak itself has been exposed as hiring slave labour from the North Korean dictatorship to work in the coal mines here, the site of the tragic 2014 explosion in which up to 9 miners lost their lives. No one out of choice would subject themselves to such unsafe working conditions if they were not forced to, especially not for a minimum wage.

If the Minister wants Sarawakians to agree to do challenging work, then he must consider driving the plantation companies to increase workersâ€™ salaries and improve working conditions, and until the access to a cheaper and more compliant workforce is cut off, this will never happen.

The fundamental purpose of government is to uplift the standard of living of their citizens as a whole, stimulating business so that it can provide a better life for the populace.Â  If only half of that equation is addressed, then the work of Rural Development must be deemed a failure.

The reality is that no one is entirely clear how many foreign workers are currently in Sarawak.

James Masing puts the figure of documented workers in the plantation sector at 78% of 103,000, which is 80,340.Â  But this figure is 15% above the figure of 69,666 as of 30 September 2015 given by Masir Kujat, then Deputy Home Affairs Minister, for documented workers in the plantation sector in answer to a parliamentary question by YB Chong Chieng Jien.

In fact, it seems that this figure is in all likelihood far higher as plantation companies persist in employing undocumented labour, as proven by the numerous reports of arrests of so-called illegal immigrants on plantation sites.

He put the figure of Indonesian citizens alone working in the plantation sector at closer to 130,000, far above Dr Masingâ€™s figure of 80,000. It seems that there are few controls on the influx as it is.

It would appear that the current system of controls on migrant labour is woefully inadequate.

The State Secretary and Immigration Department of Sarawak are able to circumvent the controls of the State Labour Department on overseas workers, the department tasked with looking after workersâ€™ welfare in Sarawak, and do so on a regular basis.Â  Many workers, for example, are currently brought in on social visit passes or temporary employment visas at the direct request of the State Secretary.

This is why Sarawakians can see such huge numbers of Indian workers at coffee shops, waiting tables.

This is why the Sarawak State Government has agreed to do business with North Korea, one of the most corrupt regimes on earth, against the advice of the United Nations Special Rapporteur on Slavery.

The Rural Development Ministerâ€™s assurances that the workers will be brought in on a case-by-case basis is presumably meant to be comforting for the citizens of Sarawak. However, this leaves the whole process open to the most appalling abuses.

If there are no criteria for assessment of need and no standard operating procedure, then who will be making the decision in each case and on what basis? Will it simply be up to the Ministerâ€™s discretion?

It seems that, once again, access to foreign workers could be based not on what Sarawak needs but on who the plantation owner knows.

Therefore, until the State Government plugs the gaps in its current immigration procedures and follows its own procedural safeguards, Sarawakians will not feel safe with the number of overseas workers allowed in.

Until the State Government decide to make plantation companies uplift the local rural workers by increasing wages or improving working conditions and rural infrastructure in return for their licenses to make money, then genuine rural development will not occur.

Until the State Government decide to consider the most deprived members of Sarawak society as equally deserving with the most privileged, the plantation sector will continue to be seen as the bane of the rural economy rather than the saviour.