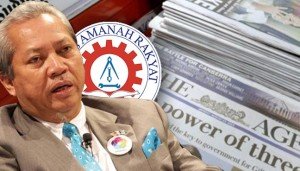 To prosecute or not to prosecute? That is the question

The initials MARA stand for Majlis Amanah Rakyat, which is a “council of trust for the people”. Besides offering aid and training to Malays and other indigenous Malaysians, in business and industry, it provides opportunities in education via its boarding schools, colleges and universities.

Like the NEP, MARA started-off with good intentions and there is no doubt that it has helped many Malays..

Today, MARA might as well be an acronym for “Mana Ada Responsibiliti & Akauntabiliti.”

In June, an exclusive report in “The Age”, an Australian newspaper, alleged that top Mara officials, and former politicians were involved in a major property scam, in Melbourne. “Super-rich Malaysian officials” had allegedly “overbid” for an apartment block, and pocketed the difference. Australian developers had allegedly received sham invoices for fake “consultancy and advisory” services, from Malaysian firms. The property transaction took place between 2012 and 2013.

After the exposÃ©, the chairman of the investment arm of MARA Inc, Mohammad Lan Allani, and his CEO, Abdul Halim Rahim, were suspended.

Yesterday, the Rural and Regional Development Minister, Ismail Sabri Yaakob, announced that the contracts of the two men, had been terminated.

Ismail Sabri claimed that MACC was still conducting investigations,Â  and that several MARA officers had assisted in the enquiries.

Why are the investigations taking an inordinate length of time? The nation has been restless, with all the corruption scandals which end in “NFA” (no further action)”, insufficient evidence to prosecute, or worse still, take aeons to complete.

Ordinary Malays will be discussing this scandal in their homes and warungs, noting that Malay leaders are prominent, whenever big money goes astray and that the big fish always escape.

In the past, disgraced public servants were asked to resign, and then posted overseas on a cushy assignment in the diplomatic service, or asked to enrol at a university abroad. The idea was to allow ample time for people at home, to forget the indiscretions. Will this route be followed by the former MARA chairman and his CEO?

If the two men had done nothing wrong, their contracts would have been renewed. So, are they being made the scapegoats for the property scandal in Melbourne?

“False” invoices and kickbacks are a common phenomenon, especially in defence deals, like the Scorpene deal; several hundred million Euros in kickbacks and false invoicing for maintenance, were involved.

When the story broke in “The Age”, it shocked both Australians and Malaysians, but the MARA chairman, Annuar Musa, confidently claimed that the property deal had the endorsement of Najib Abdul Razak. A few days later, in a U-turn, he said that Najib had actually opposed the transaction.

The government has been engaged in so much backpedalling, that the rakyat has lost all confidence in what officials and ministers say.

Annuar Musa is not without controversy. He supported giving MARA scholar, Nur Fitri Azmeer Nordin, who had been charged with paedophilia, in England, a second chance. Few sex offenders have such luck.

Last August, at the height of the red-shirt rally, Annuar horrified other Muslims, with his open and proudly declaration, “I am racist, Islamically.” He said that racism was “permitted” in Islam.

If not for “The Age”, would we have known about the corruption in MARA Inc? How many property scams are yet to be exposed? Should we scrutinise MARA’s property purchases in Washington and London? Are overseas purchases, by other GLCs like FELDA, clean?

The Malays, like most Malaysians, are an extremely tolerant lot. The government should not allow corrupt MARA officials, and former or current politicians, who are complicit in wrongdoing, to escape scot-free. Â Ignoring the rule of law, is doing the Malays a disservice. Malaysians must learn that crime does not pay.

This scandal is serious and is not just a property scam. The implications are corruption, money laundering and criminal breach of trust. Simply sweeping the matter under the carpet brings disrepute to the institution which was formed to help the Malays, and also to the meaning of the word “amanah” (trust).

Perhaps, this is “trust”, Umno-Baru style.

The full article was published in FreeMalaysiaToday (FMT) on 6 November, under a different title:

Note: Even the most loyal of MARA beneficiaries will NOT want the good name of MARA to be sullied by their chairmen, both past and present, or members of the board, escaping scot-free for their alleged CBTs, sex crimes or the outrageous insult, that Islam supports racism.