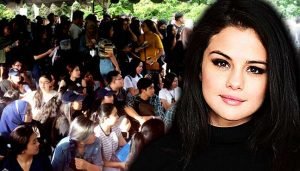 To get around the bans by PAS and conservative Muslims, international artistes like Selena Gomez should sing nasyid songs only.

It is not the first time PAS Youth has voiced their opposition to sexy artistes or gay performers, like Elton John.

A relative said, “I watched Elton John sing at Genting. It was one of the best things that has happened in my life. I was reminded of my youth. I felt young again. I love him.”

She and her Malay friends, whose ages range from thirty to seventy, claim they are typical Malay; they pray five times a day, eat halal food, a few are Hajjahs and all are married with grandchildren, except for the youngest who is still forging her career in the music world.Â  The remarks from conservative Muslims and PAS did not bother them.

At a Black Eyed Peas concert, in 2009, the critics targeted the organisers, Guinness. The Communications Ministry stipulated that beer should not be served to Muslims. Only non-Muslims were encouraged toÂ  attend.

A few years ago, one man helped in the organisation of a PAS event in Kelantan. He was amused by the strict performing guidelines in the state.

Most stringed instruments were not allowed, and guitars should not be held above shoulder level, as some rock guitarists are wont to do. Drums were fine, whilst the rebana and the kompang were perfect.

This man tried to tell the PAS representative, that few young people would be attracted if these were the only instruments played. The PAS man insisted that he knew best.

In addition, women could not mingle with male actors on stage, nor could they assume male roles.

The reverse was also true. Men could not play women’s roles.

This event planner said, “It was hilarious. We tried to explain that Â you cannot have a play where only men, or only women, perform. We tried to compromise, and have a male play a woman’s role, and project a female voice onto the stage.

“They objected. In the end, we scrapped the event.”

Selena singing Nasyid is a winner

Artistes make money and also generate a lot of income, for the country, in which they perform.

If foreign singers were to sidestep Malaysia, and perform in neighbouring countries like Singapore, Thailand or Indonesia, we would lose out.

Who knows? Selena singing nasyid songs may pick up a new following of conservative Muslim fans.