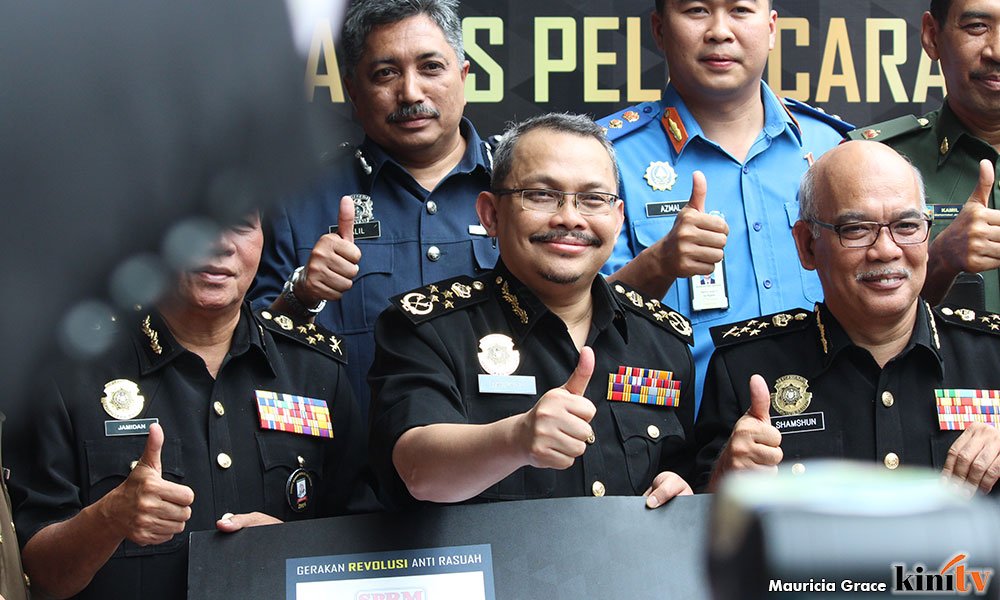 The Malaysian Anti-Corruption Commission (MACC) chief commissioner, Dzulkifli Ahmad, was grateful that he “survived” his first year in office. He said,  “Today is my first anniversary as chief commissioner and I am still surviving. Alhamdulillah (praise be to Allah).”

He claimed that the public had lots of confidence in MACC, and in him. He said “…the public is happy with the achievements of MACC .”

Self-praise is no praise

Dzulkifli must be in denial, or blind, or both.

The person who was given the pink diamond has not been hauled up for questioning. The 1MDB scandal rocks Malaysia, but Jho Low, Riza Aziz, who is Najib Abdul Razak’s stepson and a whole host of other people, who stole from the Malaysian taxpayer have escaped scot-free.

On 31 May, Sarawak Report (SR) posted an article which alleged that Najib’s hand-picked lawyer and close confidante, lawyer, Mohamad Shafee Abdullah had been “one of the biggest individual recipients of money from Najib’s 1MDB slush fund accounts”.

Both Najib and Shafee, have failed to issue a statement about the RM9.5 million which Najib had allegedly deposited into Shafee’s account.

More importantly, the MACC chief has not started to investigate either man over SR’s allegation.

The latest bombshell from France

Today, it was reported that Najib’s friend and adviser, Abdul Razak Baginda, was charged in France, over alleged kickbacks in the 2002 sale of the Scorpene submarines. Abdul Razak Baginda was an aide to Najib, when he was the Defence minister.

Abdul Razak Baginda and his company, Terasasi, received several hundred million ringgits, for “consultancy work”, although investigators believe this was really a front for kickbacks.

It is apparent that the MACC is dragging its heels. Zulkifli once said that he would not probe corrupt politicians before GE-14, because he did not want the investigations  to be used as election campaign fodder.

Why is Dzulkifli wanting the rakyat to waste valuable resources, for a by-election, should they uncover a corrupt politican? People do not want to waste time to return to the ballot box and re-elect another candidate.

Dzulkifli’s choice of word, that he “survived” his first year is interesting.

Did he “survive” because he did not do a lot, but did just enough to give the rakyat the appearance that the MACC is doing something? What is the point of catching ikan bilis, when he allows the sharks to escape scot-free?

Or did Dzulkifli “survive” because to do nothing, means that he will not disappear, or be sacked from his job, and suffer a similar fate which befell a few people in decision making roles in government?

So, will Dzulkifli continue to pretend the MACC is doing something, or will he pull his socks up and make a real difference?