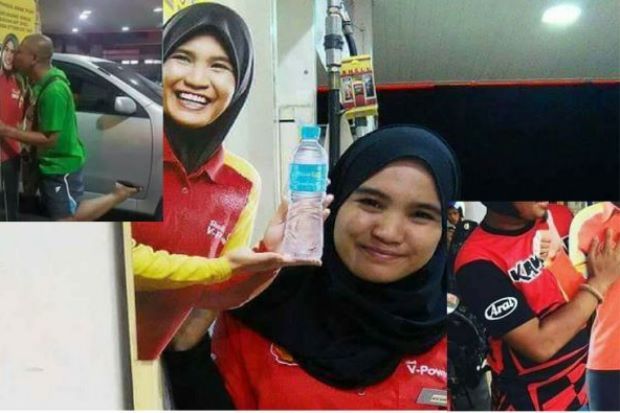 Some people did not think that Shahril Azmi Abdul Shukor aka Abang Shahril, had done anything wrong, when he kissed the cardboard cut-out of the Shell worker, Nor Shafila Khairusalleh.

Disturbed by the unwanted attentions of a few men, kissing and fondling Nor Shafia’s scardboard cut-out, Shell decided to remove all of Nor Shafila’s standees.

Cast your mind back to the 1940s. During World War II, many armed forces staff would have posters of their favourite singer or film star stuck on their walls, or on the inside of their lockers. They would have kissed the image regularly, for the simple reason that they adored and “fancied” that person.

When we were teenagers, and had pin-ups of our favourite singer, or film star, we probably caressed and kissed his photo whilst listening to romantic songs. It was just a passing teenage fad. Most of us experienced it.

Shahril has now apologised, and Shell has removed all the standees bearing Nor Shafila’s image. So, did the company over-react? Were the netizens who felt that Nor Shafila had been “harassed”, just a bunch of prudes?

I asked Liz, a 60-something former model, what she thought of the fuss created by the SHELL cardboard cut-out. Liz, who is also a a successful entrepreneur and attractive grandmother of 4, said, “You only live once. Lighten up. When I was much younger, I was bogged down by my feminist ideals. I took life seriously, I got annoyed at men wolf whistling and winking at me. I was easily angered by my male admirers.

“Now, I realise that I have been a terrible prude. If I could live my life again, I would recognise those flattering demonstrations and would appreciate them all the more. Oh how I miss their crude gestures of showing admiration.

“I am not a flirt but it is nice to get a wolf whistle once in a while. Shows that I still have my looks. Nothing wrong at being appreciated for my good looks, is there?

It is ironical that when we are young and attractive, we cannot handle the male adulation; then when we are older, wiser and more confident, we may have nothing left to flaunt.

There is something more worse than growing old, and that is to be invisible.