How many times have we read about rape cases and been horrified when the police in charge of the investigations, a misguided ulama and sexist people say the following.

Their reasons for inviting rape…

She invited rape because she was:-

i) Wearing a short skirt.

iv) Hair was not covered with a tudung.

vi) Smiling a lot, so I knew she was asking for sex.

vii) In the nightclub. 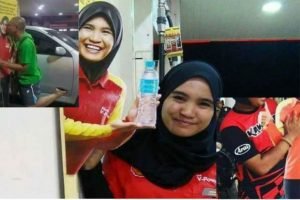 A few days ago, Shahril Azmi Abdul Shukor, aka Abang Shahril, courted controversy when he “molested” a life-sized promotional standee at a Shell station.

He has since apologised for his actions and uploaded a four-minute video on Facebook saying that he had crossed the line when he kissed the standee.

He said that the picture of him kissing the  cardboard cut-out, had been shared in a WhatsApp group and gone viral.

Although he was only joking, he said that he had “… let the excitement get the better of me”..

He also pleaded with internet users to give him a break as their comments hurt him.

Whilst we applaud Shahril for his honesty, this example clearly demonstrates that in many cases of sexual harassment, women are NOT the problem. Men are. The woman in the Shell poster was fully clad and her head was covered.

So, for all the ulamas, the police and the numerous other people who like to blame women for “inviting trouble because they did not cover-up and “tutup aurat””, when will they acknowledge that it is NOT women who are at fault? Men are.

(Please note, that sometimes, women can be some of the world’s worst misogynists.)