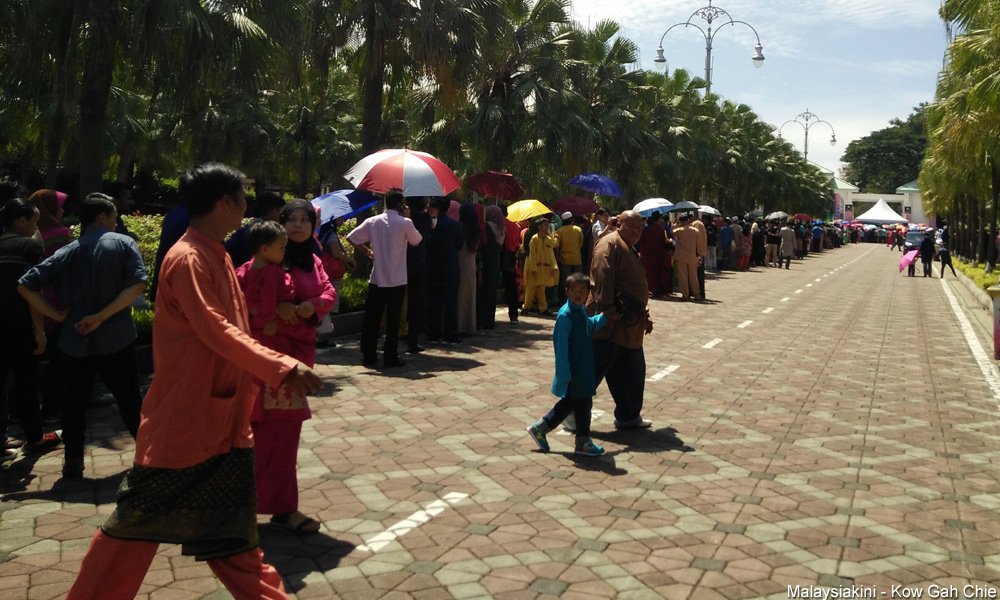 Are you one of those who jumps at the offer to attend an open house of a senior politician, like the PM, for Hari Raya?

When our leaders say that open houses promote unity and national harmony, do you believe them?

What sort of people are prepared to queue for hours, to shake the PM’s hand for all of 2 seconds, then take part in the mad scramble for food and the goodie bag afterwards?

Are open houses an election gimmick practised by politicians from both sides of the political divide?

In 2014, the Gerakan president, Mah Siew Keong, claimed that the Gerakan Chinese New Year open house was attended by 5,000 people, including the PM, the Deputy PM, and their wives.

Mah said that the “harmonious and joyous gathering of Malaysians proved that Malaysia is a united country.”

This is like saying that flying a Malaysian flag outside one’s home, or business premises, shows that one is patriotic. It would also be wrong to equate a large turnout as support for the politician.

One couple who regularly attends these open houses said, “I am a taxpayer and I do not agree with politicians holding open houses. Although I am not qualified to receive BRIM, going to an open house is the only way I know to make sure that I get something back from the government.”

The Gerakan National Unity Bureau chief, V. Prabagaran, claimed that the high attendance at its 2014 open house, was indicative of a united Malaysia, despite the people’s political differences. He said, “We’re moving towards developed status so it’s time we practiced mature politics.”

What is Prabagaran suggesting? Shouldn’t mature politics be practised regardless of the state of development of the nation?

The PPP Federal Territory chairman, A. Chandrakumanan, said that open houses allow leaders to mix and mingle with the crowd and he said, that the ‘1Malaysia’ unity concept is not mere rhetoric.

Chandrakumanan is being too simplistic, when he defined ‘1Malaysia’ just by the open house, at festival time.

He should realise that ‘1Malaysia’ should encompass things like fairness, opportunity and an equal moral, economical and social impact, on the different races.

Open houses have, and always will be, a unique Malaysian tradition.

Some years ago, the Perak mufti, Harussani Zakaria ,warned Muslims not to visit open houses of non-Muslims.

Many Muslims, heeded his warning and their boycott extended beyond the day of the Hari Raya open house, when they began to avoid visiting the homes of their non-Muslim friends throughout the year.

The few who did visit, refused to eat or drink, because somehow, they were afraid that the food served had been prepared by non-halal hands, and the plates and glasses may have been contaminated by non-halal food or drink.

Who pays for the open houses? You do! The taxpayer.

When asked in parliament, about the cost of the open house, in 2009, Minister in the Prime Minister’s Department, Shahidan Kassim, said that it cost RM1.7 million to feed between 80,000 to 90,000 people, although DAP’s Lim Kit Siang had quoted the mainstream media’s figure of a turn out of between 50,000  to 60,000 people.

Shahidan’s figures would mean that it costs on average, RM20 per person. If it were true, that only 50,000 to 60,000 people attended, then the cost per person is around RM31 per person.

Does it really cost that much to feed one person? Was the food extraordinarily good?

Four years later, the cost escalated to almost RM3 million, for an increase of only 10,000 people. A steep rise!

Have the crony catering companies done a bit of creative cooking of the books, and pocketed the difference?