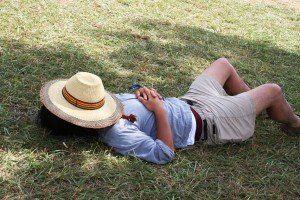 It is bad enough to know that some civil servants are sleeping on the job, but to be told that federal civil servants will be given “special leave” on July 8 (Friday) if Hari Raya Aidilfitri falls on July 6, is stupid.

The rakyat is displeased with the productivity of some government departments, and to know that the civil servants will be given special leave, is an insult.

The chief secretary to the government Ali Hamsa announced that this “special leave” would NOT apply if the first day of Raya fell on July 5 (Tuesday).

Ehhh… why not give the federal civil servants two extra days leave, on Thursday (7 July) and Friday (8 July)?

Actually why not give them the whole week off?

Ali urged members of the public who planned to visit government departments and agencies on Friday, to come before the Hari Raya public holidays.

Has Ali ever visited the government departments prior to Hari Raya, or other major holidays? The civil servants have left early.

Does Ali know what this “special leave” will do to the nation? It reduces productivity, grinds everything to a halt (in the public services) and breeds resentment.

Does this special leave apply to the civil servants in the various states? The northern states already have a different working week from the rest of the country.

What about people in the private sector? They will be seething withÂ  anger. It is doubtful that private companies will allow an extra day’s leave, just like that.

This cost will have to come from somewhere.Â  Who pays for the extra day of leave? The answer is simple. The Malaysian taxpayer!

Will this “special leave” be taken out of the civil servant’s annual leave entitlement?

Ali was grateful to Najib Abdul Razak for agreeing to the “special leave” proposed by the Congress of Unions of Employees in the Public and Civil Services (Cuepacs).

He said, â€œHopefully, public servants will benefit from the special leave in celebrating Aidilfitri with their families and continue to be productive and give the best services when they return to workâ€. Dream on!

Oh yes, the real reason that this “special leave” was given is because Najib is afraid.

He is in power only because of the cash-rich fence-sitters and civil servants. Najib is on borrowed time. The scandals of 1MDB, hudud and Hadi, Pahang mufti’s call to kill “Kafir Harbi”, denying medical treatment for Anwar Ibrahim and now Lim Guan Eng’s arrest, is making the nation restless. Malaysians bristle with anger.

How does Najib appease the civil servants?

By declaring a special holiday.

Another inducement to win favours.