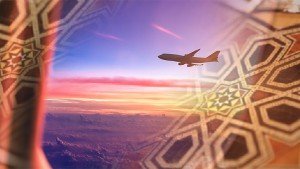 Anyone who flies, has a list of things he hates about his fellow passengers, the airline, the crew, destination or the flight.

I cannot bear the stranger who falls asleep on my shoulder, dribbles and snores. Everytime you push them away, they roll back onto your shoulder.

Did you know that passengers flying on syariah compliant airlines (SCA) have slightly different pet hates from normal airline passengers. They are:

1 Loud music: Normal airline passengers hate passengers who listen to loud music, but passengers on SCA freak out, when they hear whole rows of people praying loudly, especially when the plane goes through a patch of turbulence.

It is bad enough containing one’s nerves, but having to hear loud prayer, from the whole cabin, as if the whole plane is going to crash, is enough to cause one’s life to flash before one’s eyes.

2 Flirty people: Some people are annoyed by passengers trying to flirt, on normal airlines.

SCA passengers complain about people trying to convert them, especially if they look non-Malay and non-Muslim. The cure is to carry a book so that when the person sees the cover, he withdraws. One book title which works particularly well, is “Self-help cures for venereal disease.”

3 Fellow passengers: On normal airlines, some people are content to make the occasional small talk if neither are preoccupied with a film, or sleep.

On SCA, people complain that their fellow passengers refuse to communicate, because a) they are of the opposite sex and b) they are silently praying.

Despite introducing yourself, they are silent and give you the killer stare. You know they are praying from their moving lips, and their fingers, which are furiously moving their rosary beads around.

4 Poor selection of entertainment channels:Â Passengers sometimes complain that the selection of music and films on board is boring.

They need not worry, on SCA. There is plenty of choice between channels playing programmes on Faith, The Islamic Empire, Islamic Sects and finally a channel similar to National Geographic but called The Muslim World, with glimpses into Muslim communities in the Arabian Peninsula, East Africa, Central Asia and China.

5 Ablutions:Â Passengers travelling on budget airlines, have sometimes used the toilets as a bathroom, where they wash their hair before they land. They wet the floor and block the wash-basin with their hair.

On SCA, the same wet floor syndrome is seen because people need to perform their ablutions before prayer.

6 Food:Â On normal flights, some passengers forget that in economy class, the meal choice is limited, and unless they have made special arrangements to have fish-free, beef-free or a vegetarian meal, there is little point quizzing the cabin crew about the food available.

SCA only carry halal food, and there is no need to worry about sitting next to a drunken bore, unless he was tanked up at the bar, before boarding.

You can start to worry when one of the passengers lights a fire, at the back of the plane, to cook a sheep’s head.

7 Changing seats: Some people want to change their seats because they cannot sit next to a window and prefer the aisle seat, or they have long legs and must sit in the seats next to the emergency exit.

In SCA, the problems caused by people changing seats are worse. The delays are long, because a game of musical chairs is played, with people demanding that they sit next to a person of the same sex.

In the rare case of a plane full of men, with only one stewardess on board, the whole flight would be aborted. This is to avoid possible khalwat, or taharrush (sexual assault or gang-rape) during flight.

People who travel normal airlines tend to ignore the food, because it is terrible and so the religion of the cabin crew, who serve them, is immaterial.

On SCA, the question of haram hands and porcine DNA, will not crop up. Ahhhh…the food is just as bad, as in normal airlines

9 Alcohol: Nervous flyers consume alcohol, because they claim that it helps to reduce their anxieties about flying.

SCA offer what is known as air Zam-Zam (miracle Zam-Zam water), which is sold at a hefty premium, and may cost more than the bottle of bubbly, on some airlines.

Only naive people think that religion is not about making money.

10 Safety briefing: Passengers have a bad habit of switching-off once the cabin crew start to give the safety demo.

Safety is important, but faith takes precedence in SCA. That is why group prayers, for our safety, in this and the after-life, are offered; but one question remains unanswered. During an emergency, are the pilot and his engineers using their technical skills to overcome the problem, or will they just say that whatever happens, is God’s will?