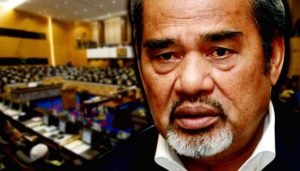 The behaviour of Tajuddin Abdul Rahman and Jamal Yunos tells us a lot about the future of UMNO. These two “gentlemen” are not ordinary UMNO members.  The former is an UMNO deputy minister, the latter the division chief of UMNO in Sungai Besar.

On 21 November, this minister made the sexist remark, that Seputeh MP, Teresa Kok, was the only woman with a “kok”, and refused to apologize when asked too, and he was not censured by the deputy speaker chairing the parliamentary debate.

It is rewarding to refresh our memory about this UMNO minister.

In 1995, he was expelled from UMNO following allegations that he had paid RM6 million to secure his position as a division chief, a case connected to alleged corruption in the award of a RM1.3 billion contract to his company to build the Universiti Teknologi Mara campus in Tapah, Perak.

In 2008, he used the words “bastard” and “bloody bastard” against Ipoh Barat MP M Kulasegaran.

In 2015, he was reported to have threatened to slap any Chinese who would complain about Malaysia when abroad. In his all wisdom, Najib has appointed this man to the cabinet, in the firm conviction that it is in the best interests of UMNO and the country.

The shows enacted by Jamal Yunos have been amply covered in the media since Bersih4 last year, and will not be repeated here.

In his heart of hearts, he must have believed that his behavior reveals the best about UMNO and he has done a great service to his beloved party.

May Malaysians assume that this sincere belief of the UMNO division chief is shared by the top UMNO leaders?

What their standards reveal about UMNO

But, how do these two leaders measure up to the standards shown by former DPM Musa Hitam and Malaysia’s second DPM, Tun Dr. Ismail Abdul Rahman? What do they tell us about UMNO?

Since Anwar Ibrahim left UMNO in 1998, the party has been unable to attract capable Malays who have a sincere calling for politics. Just compare the quality of young leaders of UMNO with that of young leaders of the opposition parties and of civil NGOs like Bersih.

Unless the trend is reversed, UMNO and its junior partners within BN are doomed.

The quality of new recruits of a party is a very reliable barometer of its future. This simple fact is amply illustrated by the fate of many political parties all over the world. UMNO cannot be an exception. No amount of money politics can save it.

Meanwhile those BN people who still hold illusions about this sinking ship will do well to jump ship. To them, my best wishes.