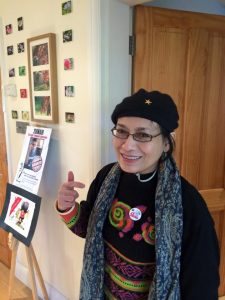 Look at who’s spreading Fake News? Najib Abdul Razak’s lap dogs – the NGOs stated below, as well as Bernama and the Sun Daily.

They accuse me of  “organised terrorism”. Moi?

The NGOs should have made their police report on 1 April (and before 12 noon) which is  April Fool’s Day; but typically, were one day late.

The people who know me, who work with me and who have broken bread with me, will be highly amused, that I am a terrorist.

My articles are terrorising MO1

The police report confirms that my articles on Najib’s alleged theft of the rakyat’s money, kleptocracy, injustice, abuse of power are terrorising him.

Who will arrest Najib’s lap dogs for spreading “Fake News”? No one. The authorities practice double standards.

TV3 aired their antics at 2030 hrs that day. What a waste of resources.

Five years ago, the former IGP turned-mamak-stall-cook, Khalid Abu Bakar, called me a communist, over this article, One Ideology, Two reactions.

There is no cure for stupidity so let’s just leave it at that. I don’t deal with stupid.

(NB. The Sun Daily “Fake News” is reproduced below. I will attempt to get the TV3 “Fake News” footage.)

PSUAM president Syed Imran Syed Abdul Aziz, who represented the NGO, said the organisation wanted stern and appropriate actions taken by police and the Malaysian Communications and Multimedia Commission (MCMC) on the video, which was seen as threatening public order.

He alleged the individual who made the slanderous statement said the Prime Minister wanted to topple the Yang Dipertuan Agong to become the President of Malaysia.

“We are very disappointed and upset with statement uploaded by Mariam Mokhtar … it is clearly a slander with evil intention as well as a form of organised terrorism with the aim of scaring the people,” he told reporters after making the report, here today.

Apart from that, the groups also lodged a police report on a status posted on Facebook believed to be a picture and video meant to insult the Prime Minister and smear the image of the national leader to achieve certain intentions.

“Irresponsible parties have deliberately ran down the image of our national leader by any means with total disregard for the law.

“So they will be coming out with wrong facts and slanderous issues in the social media to break up the people and threaten peace in the country,” he said.

He also fully supports the Anti-Fake News Bill 2018 which was introduced by the government recently and called on the government to temporarily close down Facebook. — Bernama

(Reproduced without the permission of TSD as it concerns me!)