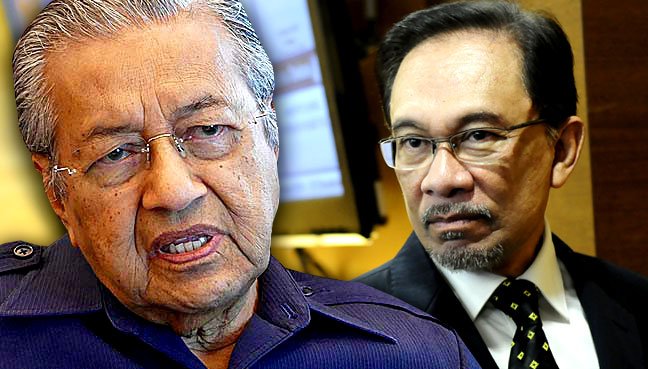 Yin: The reason why I am still making the case against Mahathir Mohamad as PM (even interim PM) is that Pakatan Harapan (PH) has NOT decided on who the interim PM will be.

According to Ahmad Martadha Mohammed, an associate professor at Universiti Utara Malaysia, while Mahathir has portrayed himself as numero uno, others disagree, saying that Wan Azizah is the number one in the coalition. Lim Guan Eng has been reported as saying “We have certain names in mind but it’s something to be decided later. It’s a question of strategy.”

So you have it, it is not a fait accompli that Mahathir will be interim PM – there are other candidates.

What is also encouraging is, “Pakatan Harapan plans to seek a royal pardon for jailed de facto leader Anwar Ibrahim if it wins,” according to the article.

This being the case, those who do not want Mahathir should make it known in the media and to PH their feelings about Mahathir.

Probably one reason why the PM position has not been decided, is that PH is trying to gauge the public’s mood on this issue.

According to the article (Bloomberg, 4 August 2017) “it is unclear how much voter support he (Mahathir) can garner”. So Mahathir’s involvement is not a guarantee it can garner the votes.

I can confidently say no one wants Mahathir if they have a choice. The only reason some have agreed to have him is that they feel they need him to topple Najib.

Yes, we should not exclude Mahathir in this fight but we don’t have to hand him the premiership!

If Mahathir is told he won’t be the interim PM, what do you think he can do? He has burned his bridges with Najib Abdul Razak, and as long as Najib is President of UMNO there is no way Mahathir can return. So the only way Mahathir can stay relevant is to be in the Opposition as a member of PH.

It is PH that has given Mahathir relevance not the other way round, many have forgotten that. Parti Pribumi Bersatu Malaysia (Bersatu) was getting nowhere until it joined PH.

Will Mahathir withdraw from PH (because he is not given the premiership)? No, he won’t because he has a vendetta against Najib.

Lim Kit Siang has invited NGOs to help PH frame the reform agenda. How will this sit with PM Mahathir?

Mahathir/PPBM is gungho on Malay Nationalism, in other words the same race politics he has been playing for 30+ years. On the other hand Anwar/PKR is for a race free affirmative action. And DAP is for a Malaysian Malaysia. This spells trouble in the future. And if Mahathir is the interim PM might he not push the same agenda, against his partners and this will inevitably lead to friction in the coalition at a time when it needs stability.

We all have seen how “interim” has a funny way of being temporary indefinitely. Once PM, Mahathir will not give up the position easily or willingly. Attempts to do so will cause the breakup of PH. And with the balance of power in parliament expected to be slim, can PH afford to take the risk? Can we?

Not about hate or forgiveness

It is not about “hating Mahathir”, or about “forgiveness”;  the country’s future is too precious to let personal feelings get in the way. It is about whether Malaysians can trust Mahathir – someone with a track record of saying one thing and doing another. On the evidence, no objective person will trust the man.

“Idealism is a luxury we cannot afford when the house is on fire”. How true!

Those bleeding hearts who think that an old man of 92, should be given a chance to make amends before he meets his maker, is living in an idealistic romantic dream world.

We cannot afford the luxury of our “idealism” (another word is“naivety”) of trusting a serial offender like Mahathir again. He started the fire, and this time he might just burn the house down.