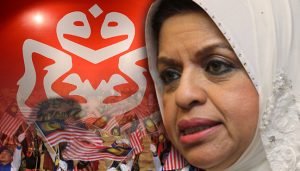 New “Malaysian Official 1” definition: Democracy is the freedom to elect our own dictators. 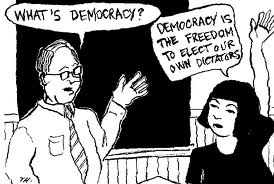 Today, Wanita Umno-Baru leader, Shahrizat Abdul Jalil warned the rakyat that foreign interference could topple Malaysia’s democratically elected government. She said, “The consequences of such tactics will get out of hand, just as what occurred to Iraq and Syria, which in the end not only invited conflict but also prolonged civil war.”

Scaremongering again! Just like last December, when she helped to lay the groundwork for endorsement of the controversial National Security Council (NSC) Bill by creating panic and fear.

Back then, she warned delegates that foreign elements were attempting to topple the Malaysian government. She called for â€œsacrificesâ€ to be made so that the â€œpeople will continue to enjoy peace and harmony.â€

She talked about the spilling of blood and directed her barbs at former Deputy PM Muhyiddin Yassin and former PM, Mahathir Mohamad.

Why is she being irresponsible?

Two reasons. The cash cow and the sacred cow.

1MDB generates unlimited wealth to the select few; although 1MDB is the rakyat’s money, it must be protected at all costs so it can be treated like a personal kitty.

Protecting the cash cow, means that the “Malaysian Official 1” cannot be criticised. The sacred cow. He can do no wrong.

The US Department of Justice (DOJ) lawsuit caused a stampede of Umno-Baru loyalists, coming out to defend the Sacred Cow, who wants to protect his Cash Cow. They produced more “cow-apples” (Cow-apples=Bull Sh**).

Hishammuddin Hussein, told us NOT to politicise 1MDB.

Umno-Baru division leader aka Red-shirts leader, Jamal Yunos, urged his red-shirts to go on another stampede.

Turtle egg consumer, the Rural and Regional Development Minister Ismail Sabri Yaakob, of the “Oops, I was not aware that turtle eggs were on the endangered list,” infamy, said it was hypocritical of the Opposition to demand “Malaysian Official 1’s” resignation.

All these loyalists, are afraid. If “Malaysian Official 1” goes down, so do they.

Last year, Shahrizat claimed that disunity in Umno-Baru would allow DAP to gain control of the Malays; “Do you want to surrender the Malays and bumiputera to DAP? I am not prepared (to do so). Let blood flow. We wonâ€™t allow DAP to take over. If Umno is weak, God forbid, our country will be taken over by DAP.â€

Senior politicians should not make remarks that have the potential to create panic and distrust.

What was Shahrizat implying?

Why the reference to civil war?

If an ordinary member of the rakyat, or an opposition politician, were to make such a remark, he would be charged with sedition and hauled to prison.

Shahrizat also attributed the â€œdestructionâ€ of the Middle East to the fight for human rights and democracy.

She said, â€œTake heed of what happened in Iraq, Egypt, Paris (sic), Syria, Yemen, Mali and other countries. Cries for democracy, human rights and freedom are made, but only to serve personal interests, and they destroy the society that was painstakingly built by their countriesâ€™ forefathers.â€

In Malaysia, democracy is the freedom to elect one’s own dictator.”