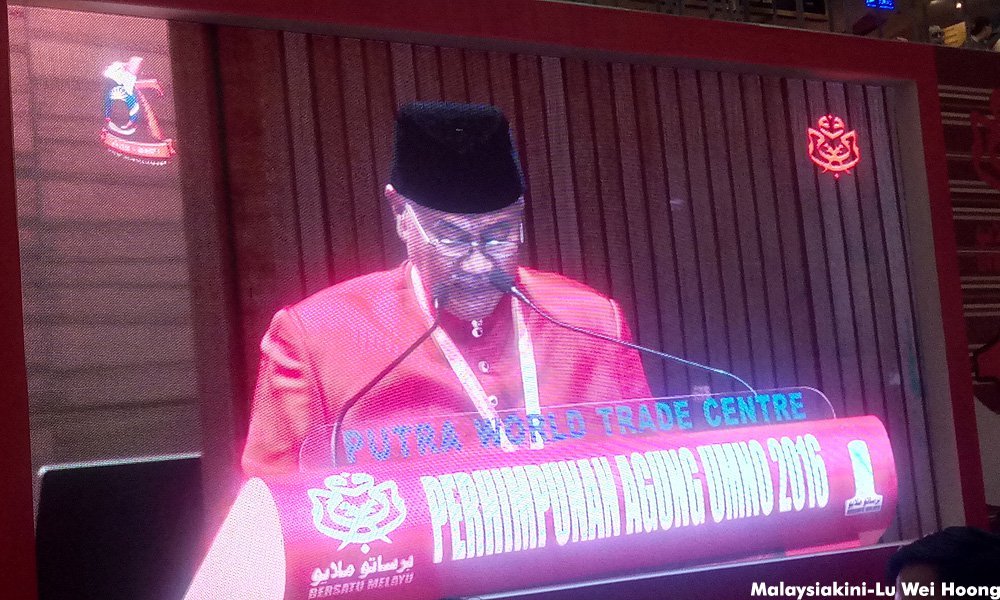 Good lord! The Umno-Baru General Assembly (GA) is like a freak show. This time, the best of the worst, the most stupid, the most moronic, the ones who do not think, before they speak, are on display. They take centre stage.

If ever there were prizes for sycophancy, and for being the class dunce, the Federal Territories delegate, Rizuan Abd Hamid, deserves them. He is warned that he may be upstaged, because the GA is not over yet.

Rizuan praised Najib for doing Malaysia proud, in the Muslim world and this is why the Arabs donated money to him.

“That’s why the Saudi prince gave money to Najib to be used in the elections. It was not for his own use.”

Rizuan then admits that they money was used to influence GE-13.

This man has NOT been paying attention, nor has he been reading the papers. Please could someone tell him that there was NO Arab Prince, and NO donation. That RM2.6 billion, was money that was STOLEN from the taxpayer.

“Itu Duit Rakyat yang di curi”. Which part of “Duit Rakyat” does he not understand?
Another important fact is that Rizuan obviously thinks nothing wrong about “foreign funds” influencing the results of another sovereign nation’s general election.
The hypocrite joins the gang of other Umno-Baru dolts, who will look for either Soros hiding under Bersih’s bed or any other NGOs beds.
Remember the IGP claiming that Bersih was funded by Soros?

When that lie, fell flat, the IGP then claimed that Maria Chin was a CIA operative. Why not Mossad, or PAP, or MI6 or Stazi. Maybe Maria is all of the above.

Notice how the IGP and Umno-Baru leaders, do not accuse Maria of being a communist sympathiser.

Why? Because Najib has fallen into bed with the People’s Republic of China (PRC).

Back to the GA freak show.

On the opening day of the GA, the DPM, Zahid Hamidi said PM Najib Abdul Razak, was chosen by Allah.

Zahid said, “Allah has put Datuk Seri Najib as our president. Allah wanted it that way.”

Ordinary Malays are embarrassed by these men, who once in a while, don a kopiah and white robes, then consider themselves more religious than others, and claim to have a hotline to God.

Someone, please tell Rizuan to wake-up from his slumber.

There was NO Arab prince, but there are many cover-ups, of the theft of the rakyat’s money.

Rizuan may wish to consider the following:-

1. Why did the American Department of Justice (DOJ) file a law suit to seize assets belonging to 1MDB?

2. Why was the Malaysian Attorney-General replaced?

3. Why are the MACC officers unable to investigate MO1? Why were Special Branch officers and former Deputy PM, Muhyiddin Yassin removed?

4. Why is the ringgit doing badly?

6. If the former Governor of Bank Negara was doing a good job, why was her contract not extended?

7. Why did President Obama refer to “other leaders” siphoning off a nation’s development funds into Swiss bank accounts.

8. Why is the MACC focus, now on Bersih and HR NGOs?

9. Why did the Hudud Bill, crop up last May, when the Wall Street Journal highlighted that Good Star Limited, is owned by Jho Low, Najib’s best buddy?

The Hudud Bill is to distract Malaysians from knowing that GoodStar received taxpayer’s money which then siphoned some of this into Najib’s personal bank account?

10. The Hudud Bill was used again (November), to distract the rakyat, when the rakyat was outraged that the IGP had arrested Maria of Bersih?

No one believes what Umno-Baru tells the rest of Malaysia. With the kind of mindset displayed by the best of the Umno-Baru delegates, how can Umno-Baru achieve reform?

Moral: The Malays do NOT need Umno-Baru, because Umno-Baru destroys Malays and Islam.