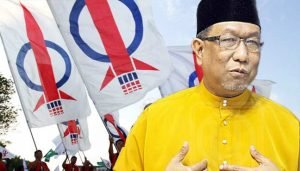 It may sound controversial but Umno-Baru has two strategies for hiding bad news. The use of old tricks. And some critical pre-planning.

What is the bigger picture for these two distractions?

These diversions are part of “The Chosen One’s” (TCO) bigger plan, to recapture Selangor and Penang for GE-14.

TCO’s government is heavily in debt. He is desperate to regain the two states, which have attracted the most foreign investment, and become the richest, while under the stewardship of the Opposition.

Lim’s arrest is the first of many surprises which TCO has prepared for the Penang people.

When the government is caught out by bad news, the rakyat is fed worse news, so that attention shifts onto the new problem.

For example, when it was revealed that Good Star belonged to Jho Low, TCO, did not want the rakyat to know this, because of the role Good Star played, in siphoning billions of ringgits into TCO’s personal bank account.

What happened? Very conveniently, the Hudud Bill was whipped-out.

Really? How so? The tell tale signs are there. No political party in the world, helps a rival party to table a bill.

Consider this too. Since when did Umno-Baru become magnanimous? Then look at what happened. Once the bill had been fast tracked to the top of the queue, PAS decided to delay the debate on hudud. The inexplicable reticence, after the desperate urgency, can only mean one thing. The fast-tracking ploy, was not a genuine act.

What is the reason for distracting?

The reason was the twin by-elections.

Bringing in the Hudud Bill means that with immediate effect, all discussion about 1MDB, Good Star, the ‘American pies’ and other associated scandals, is sidetracked. Instead, we argued the pros and cons about Hudud. The Hudud Bill was a red herring

With NO discussion on the scandals, Umno-Baru and its handouts easily “won” the by-elections.

Through their agents, a news story is concocted which the government knows will anger the rakyat. Whilst the rakyat is fuming, Umno-Baru releases the news which they want to sweep under the carpet, because they know it will enrage the rakyat, much more than the decoy news story.

The plan is to i) lessen the coverage and scrutiny which would normally have been given this second piece of bad news. ii) An attempt to introduce a particular line of thought, to influence our minds.

The Pahang mufti’s remarks about slaying Kafir Habirs, came out of the blue. He also likened the DAP to Kafir Harbi.

In other words, the Pahang Mufti set the scene for equating the evil Kafir Harbi, people who opposed Islam, with the DAP.

The reaction was predictable. Muslims were furious that Kafir Harbis dared to oppose Islam; the non-Muslims were fearful of being attacked. The DAP were thought of as Kafir Harbi.

The Pahang mufti’s important role is to introduce the “seed” in our Muslims minds, before the next chain of events was unleashed.

Neither TCO nor his senior leaders censured the Pahang mufti. The IGP made some noise about investigating the mufti for sedition. The Prime minister’s office issued a statement saying that the mufti merely made a comment, and had not issued a fatwa.

The conflicting statements were meant to confuse us.

What did the decoy news try to hide?

Whilst we were absorbed with the Pahang’s mufti’s Kafir Harbi, the government quietly issued orders to arrest Lim Guan Eng, over the purchase of a bungalow.

Why was the impact of Lim’s arrest diluted?

Because the Kafir Harbi warning had an overpowering effect, a bit like dousing a stinking body with cheap perfume.

What do you mean?

Having introduced the Kafir Harbi seed into Muslim minds, just imagine the effect of Lim’s arrest on the Muslims.

Instead of feeling angered, the Muslims just saw a Kafir Harbi being arrested.

The plan was for Muslims to be grateful that the Pahang mufti had warned them about the DAP Kafir Harbi.

What was conveniently ignored, was the transparency Lim tried to project, about the bungalow deal.

The die-hard Umno-Baru supporters and fence sitters will remain sceptic, because they will not see that TCO was not at all transparent over the 1MDB scandal, the alleged billions into his personal bank account, the American pies and more.

Many Muslims played into Umno-Baru’s hands. Instead of seeing the injustice of the arrest, they probably rejoiced.

This is why the Pahang mufti heavily promoted the connection between the DAP and Kafir Harbi, in the week before Lim’s arrest.

Be prepared for more clownish tricks. TCO likes to play with fire.