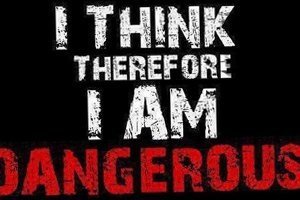 The most dangerous threat to the Malaysian government is not an invading army, a contagious disease, or a nuclear threat. It is the thinking Malay.

The young man mentioned below is just one example of the thinking Malay. There are others like him. Young and old. Rich and poor. In Msia and overseas. They are around.

On 19 October 2014, a young pharmacist Syed Azmi Alhabshi organised the “I Want to Touch a Dog” event at Bandar Utama. He didn’t expect such a huge response, when over 1,000 people  (Muslims and non-Muslims) turned up.

Whilst man and beast were having lots of fun, in other parts of the country, some Malays were fuming. They saw Syed Azmi as a threat.

Syed Azmi may have united Malaysians but he was alienating some conservative Muslims in Malaysia. As we know, his innocent “dog touching event” was a defining moment in 21st Century Malaysian history.

Malays and non-Malays were getting to know one another, through another of God’s creatures. The people learnt to bond, not just dog with humans, but Muslims and non-Muslims.

You would have thought that any Malaysian, including the political leaders, would have been pleased to see harmony in action. People forgot their inhibitions. They did not see themselves as people of different faiths or races. They interacted with one another, with help from the dogs.

Before you could say, “woof-woof”, in waded society’s party pooper, Jakim, to spoil all the fun. Its director-general, Othman Mustapha, was furious. He barked that the programme should not have taken place to begin with. “Jakim would investigate the matter immediately,” he added.

He was followed by a Kelantan ulama who cried “Repent. Repent. Repent.” Other conservative Muslims claimed that the ulamas were being insulted.

If anyone needs their heads examined, it is these people.

This is not a political issue; so why were the ulamas angry? They were furious because they saw their power being eroded. The 3Rs “race, religion and royalty“ keep us in check, and safely divided.

For years, Muslims have been told what to do by the ulamas. The political leaders, together with their cronies and religious authorities carve up Malaysia for themselves.

One political cynic said, “To keep them in power, the leaders manipulate laws. To control dissent, they bully us with draconian laws. We are threatened with sedition. We are told that women leaders will lead us to hell.

His colleague said, “After the “dog touching event, more Malays are finally seeing the light. The Malay mind is being freed from its mental slavery. That explains why the authorities and the conservative ulamas are working at breakneck speed to find Syed Azmi guilty, but he has done nothing wrong.”

Fear of being irrelevant

Syed Azmi only wanted Malaysians to be compassionate towards animals and overcome their fear of dogs. He was not insulting the ulamas. The ulamas did not even bother to ask him why he organised the event.

The ulamas and conservative Muslims see their power base eroding. They are afraid that they will no longer be of relevance in a modern world which does not believe in the 3Rs.

Many Muslims nationwide observed the event on the Internet and saw no issue with dog touching. The ulamas are afraid that the thinking Malay will start to ask questions about their other edicts, handed down, in the past, to control Muslim behaviour.

The ulamas, like the political leaders, are obsessed with power. The rakyat is at their mercy. However, a thinking Malay can see past their warped thinking.

Touching dogs is not going to lead to touching pigs or eating non-halal food. It will not lead to free sex. It is the ulamas and their obsession with sex which makes the thinking Malay question why the ulama are stupid and shallow. The ulamas use sex as a crowd puller.

The ulamas must realise that in Saudi Arabia, the Bedouin tribesmen hunt with dogs (the Salukis), as in Afghanistan (the Afghan hounds). Dogs are used in search and rescue, for drug detection, hunting, and to assist the blind, the deaf and those with epilepsy. The dog is man’s best friend.

The thinking Malays wonder why things like chocolates, dogs, the word “Allah” and beer take prominence in the national debate. They wonder why the ulamas keep silent about the rising cost of living, petrol price hikes, the collapsing infrastructure, corruption, the abuse of power by the leaders, incest, drug taking by Malays and the high crime rate.

Today, the ulamas are against us touching dogs. Knowing how their minds work, it won’t be long before Muslims will be banned from eating hot-dogs, and using English idioms like “dog in the manger” or complaining that a book is “dog eared”, or that Malaysia has “gone to the dogs”.

The ulamas and political leaders are afraid of the thinking Malay.