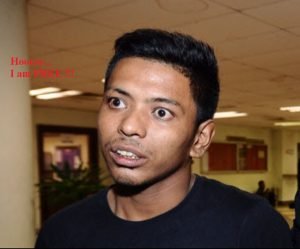 His face launched a thousand rioters in July 2015, when he stole a mobile phone from Low Yat Plaza. Instead of condemning his actions, one lawyer treated him like a hero. A warped section of Malay society turned this theft into a racial issue, claiming discrimination and cheating by the traders. One Minister saw fit to gain political mileage from the incident.

Today, you know that GE-14 is near, when this boy – a thief, a scoundrel, a druggie was acquitted by the Court of Appeal on technical grounds.

In the press report, it said that “Justice Mohtarudin Baki, in reading the unanimous decision of the three-member bench, said there was a serious misdirection of justice by the magistrate in imposing a four-month jail term and RM1,000 fine on Shahrul Anuar Abdul Aziz, now 25, that tantamounts to a miscarriage of justice.”

Justice Mohtarudin said that the accused had only to rebut the prosecution’s case to create a reasonable doubt.

“Therefore, the appeal against the sentence is allowed and the accused, acquitted. The prosecution’s appeal is dismissed.”

He had “reason to believe” that Shahrul had indeed stolen the phone, and asked him to repent, and take it as a “test from Allah”.

So that’s it? Repent and all is fine?

What message did the judges send out?

Today, Shahrul attended court in his white robes and turban, as he had enrolled in a tahfiz school.

So now, tahfiz schools are hotbeds for criminals, reformed or otherwise?

What sort of message is it sending to our youth?

What sort of message is it sending to the non-Malays and non-Muslims?

So you dress the part in your islamic/arab robes and hey presto, you are as good as gold?

Is the administration trying to appeal to the Malay electorate for GE-14?

First the administration thinks there is nothing wrong with corruption issues, drag their feet in the murder of models and bankers and people held in custody, and now this?

When the administration interferes and appears not to dispense justice, what do you think will happen next in society? .

So, have some Malays lost their sense of values? It is any wonder that the non-Malays, and many level-headed Malays, despise the leaders who fail to lead by example. 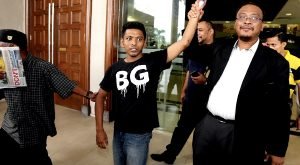 The Malay thief who stole a phone, and is now free

Anyone who looks at a photo of 25-year old Shahrul Anuar Abdul Aziz would feel alarmed. He is someone whom the majority of parents would forbid their children to befriend. The look in his eyes alternates between crazy and dazed. If they say don’t judge a book by its cover, would his criminal record convince you that this is one person who needs rehabilitation?

The riot at Low Yat Plaza threatened the peace in the heart of Kuala Lumpur. In January 2016, the Chief security guard at Low Yat Plaza, Kamarudin Shariff, testified at the Magistrate’s Court, that the accused, Shahrul Anuar had been caught by members of the public, and brought to him.

Kamarudin said Shahrul had admitted to stealing the mobile phone when interrogated in his office, before the police arrest.

The security guard testified that a salesman from Techasia Boutique, had been serving Shahrul, but when he turned his back, Shahrul fled, taking the RM800 Lenovo mobile phone with him. During his escape, Shahrul fell near an escalator and was swiftly apprehended by members of the public.

The alleged theft of the phone is not the only blot on Shahrul’s character.

Took drugs whilst in the Dang Wangi police HQ

It was reported that a day after the riot, Shahrul took methamphetamine at the toilet of the Narcotics Criminal Investigation Division office, at Dang Wangi police headquarters.

On 12 February 2016, Shahrul was charged for this offence. He avoided a month’s jail with a fine of RM2,000. He will also be under police supervision, for two years. Shahrul claimed that he has a mute mother and deaf father to support. 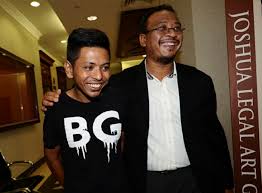 He slashed a worker’s head with a machete

Barely two weeks after his sentence, Shahrul was again in court and facing a charge of voluntarily causing hurt to a mechanic. He and teenager Muhammad Shameer Zaidi, both laundry workers, had slashed 27-year-old Hafizuddin Hamzah’s head with a machete.  Two other accomplices fled. The violence happened  in front of a workshop, Mizan Racing Tuned, in Jalan Jelatek, in Kuala Lumpur.

What have the Red Shirts who want to restore Malay pride and dignity, to say about this man and other Malay youths like him, who are attracted to crime?

What have the mullahs or the influential Malays in society to say about this misguided person? Why don’t they reflect on the actions of Malays like him, who appear to court trouble instead of being responsible citizens.

What are the success rates of rehabilitation for these misguided  Malays? Are they being given adequate education, counselling, health checks, recreation, assessment, and other intervention services?

Enrolling, like Shahrul did, in a tahfiz school is no panacea. The tahfiz schools’ administration, the Education minister, and the Minister who is in charge of Islamic affairs are all complicit in moulding Malay monsters like Shahrul in our midst.

Get rid of the scum of society. Speak out, and in GE-14, kick out the dolts who now run the country and ruin it.