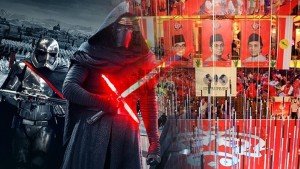 Critics claim that the people were drawn to the event, in the hope they could share some of the blockbuster earnings, believed to be in the sum of RM2.6 billion.

The stars of previous years were invited to attend, but they were not allowed to speak…..sigh!

Sadly, the original creator of the Msian Star Wars was sidelined…more sighs!

Scriptwriters: The Chosen One (President of Umno-Baru), Utusan Malaysia (main)

Storm troopers: All of the Umno-Baru Cabinet

Jabba the Hutt: Take your pick from the Umno-Baru hierarchy…..either from looks or from activities of the political and criminal underworld, just like Jabba

Emperor Palpatine: Some claim it is a certain former minister, others say, no, but it is someone who is closer to home. This person turned The Chosen One to the other side….(Who do you think the person who best fits this role?)

Why a horror film? It is because we don’t do science….our last attempt at outer space roti canai making and teh tarik tossing (in the angkasawan (astronaut) programme….failed

Our Russian comrades told a surprised Ministry of Science official that with weightlessness the teh tarik stunt would almost be impossible to perform and spinning the roti canai may end on the instrument panel, and the grease from it may mess up the internal wiring…so end of science experiments…also an insider said that only a true mamak was able to do the roti canai and teh tarik acts….no mamaks were available for the months of training….mamak restaurant business is more lucrative than simply hovering about in space….).

Anyway, the Malaysian alternative version of Star Wars is called “The Farce Awakens” (for those of you who spekking de ingres…it is not a spelling mistake…it is F–A–R-C-E….yes… yes….”farce”..as in ludicrous, ridiculous, absurd, comedy…)

The original Star Wars is called “The F-o-r-c-e Awakens.”

A detailed explanation about The Chosen One and the differences between The Farce Awakens and The Force Awakens is here:
http://theantdaily.com/main/Jedi-prophecy-as-against-the-RAHMAN-prophecy

Disclaimer: The Farce Awakens is a work of fiction (Malaysians may disagree) so those in the cast and crew, please don’t get upset.