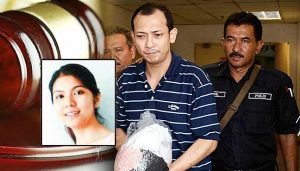 You may have read about Chee Ah Sau, the distraught father who  tried to jump off the second-storey balcony of a courthouse, when the rapist-cum-murderer of his daughter was acquitted. This was in June 2013.

Several reporters held onto him whilst others tried to calm him down, in Hokkien. The poor man was weeping uncontrollably and was inconsolable. He was eventually taken home, by his wife and a friend.

The 56-year-old man had earlier been in the High Court, to hear Justice Zaki Abdul Wahab acquit and discharge car salesman, Shahril Jaafar, 32, of murdering Chee’s daughter, Gaik Yap. Zaki said that the prosecution had failed to prove a prima facie case.

A grief-stricken Chee said, “I wanted justice for my daughter. I have waited so long for it but it turned out like this.”

Twelve years ago, on  15 January 2006, 25-year-old Chee Gaik Yap, a Universiti Utara Malaysia (UUM) graduate, was jogging with her younger sister, when she was abducted, raped and murdered. The crime was committed near Kelab Cinta Sayang, Taman Ria, Sungai Petani and her body was later dumped in a housing estate.

The suspect was Shahril. He evaded capture by running-off to Australia, where his father had obtained permanent residence.

Shahril was eventually re-arrested, at KLIA, when he returned from Perth, in 2012.

It was reported that Shahril’s semen was found on the victim but the Judicial Commissioner Zaki Abdul Wahab said that ‘the semen did not completely match with his DNA and that it was possible for a third person to have contributed to the DNA profile’.

What tests were conducted to ascertain that the semen was Shahril’s? In what way did this semen not match his DNA? Was there a problem with the collection of the forensic evidence or the way the samples were stored or tested?

Why run-away to Australia? Why do Malaysian murderers seek refuge in Australia?

If Shahril was not guilty, why did he abscond to Australia? Is it because he has no faith in the prosecution, the Chemistry Department, the investigation process or the judiciary?

It is alleged that his father is a “Datuk”. So, was Shahril being set up to intimidate his father?

Or was Shahril being protected because his father is a Datuk? Who was the third party?

Malaysians have enough experience of investigations being botched up – Teoh Beng Hock. Kugan, Sugumar, Altantuya, the Sodomy I trial.

June 2013: The High Court acquitted Shahril as the prosecution failed to establish a prima facie case.

October 2014: The Court of Appeal set aside the High Court’s decision and ordered Shahril to enter his defence.

Shahril gave an unsworn statement from the dock where prosecutors could not cross-examine him.

He told the court that he met Chee for the purpose of having consensual sex, and paid RM350 to an individual called “Wayne” for sexual services from her. He claimed that they had sex in his car and that Chee was still alive when she left. He claimed that he was not responsible for her death. He denied fleeing to Perth to escape prosecution.

November 2016: The Court of Appeal affirmed the death sentence.  A three-man bench. chaired by Justice Mohd Zawawi Salleh, dismissed Shahril’s appeal, and said that the guilty verdict was supported by strong evidence. Zawawi said, “The trial judge did not commit any appealable error and this court need not intervene.”

January 2018: The Federal Court upheld the death sentence of businessman Shahril Jaafar for the murder of Chee Gaik Yap in 2006

Chief Justice Raus Sharif said, “We are unanimous in our decision. Based on the circumstantial evidence, we found that the accused is the person responsible for the deceased’s death”. 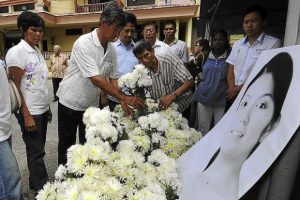 It has been a long wait for justice. Chee’s family can now seek closure and move on. May her soul rest in peace.