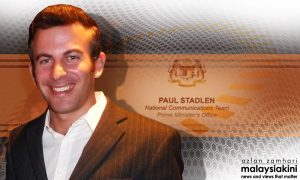 At the height of his power, the disgraced, former PM, Najib Abdul Razak employed a British citizen called Paul Stadlen as his public relations and press operations chief.

Stadlen was the head of Apco Malaysia and Najib paid him millions of ringgits. Rakyat’s money.

The 39-year-old fled the night of Najib’s defeat on 9 May. He was not going to hang around and feared for his freedom.

Today, the MACC is looking for Stadlen. They want to ask him about 1MDB .

i) Stadlen is a Malaysian permanent resident. He was in charge of Najib’s public relations and press operations. He was the boss of the Malaysian office of Apco Worldwide.

iii) The Wall Street Journal said that he was a part of the Prime Minister’s Office’s (PMO) National Communications Team in 2013.

ii) In 2009, the then BN government paid Apco Worldwide RM77 million to manage Malaysia’s image internationally. The contract was reportedly renewed in 2010 amid public outcry.

v) Sarawak Report also alleged that Apco Worldwide was retained by the PMO at a minimum of RM3 million a year and had been commissioned for a 1MDB-related project worth another RM1.5 million.

vi) In 2015, the government denied that Stadlen had been hired as a government servant, and that he had received allowances, wages and remuneration.

vii) It was also alleged that Stadlen also worked with FBC Media, a lobby group linked to a vicious online campaign against Anwar by the discredited US blogger Josh Trevino and his company, Rogue Communications.

How did Stadlen qualify for PR?

So, how did Stadlen receive “permanent residency” status?

Some foreign spouses have not received their PR. Others waited years. Some die after waiting decades.

Children become stateless, even when one parent is Malaysian, but Stadlen received his PR just like that?

Shame on Najib’s administration for their double standards and deception!