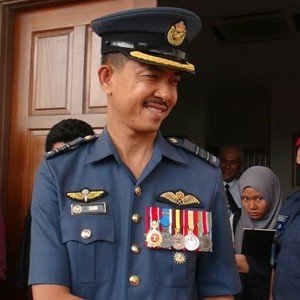 Military men and women risk their lives in the line of duty, but find, that as ordinary citizens, their democratic rights are snatched away. Umno Baru has made a mockery of democracy in Malaysia.

Officers of the Malaysian armed forces swear an oath of allegiance and loyalty to the Agong and the country. They undertake to â€œsupport and defend the federal constitution, the Agong, and the country against foreign or domestic enemies…â€ and that they will â€œfaithfully discharge their duties…â€

They must also defend the country against domestic enemies.

A week before the GE-13 on May 5, 2013, military personnel cast their votes first. Some allege that the ink washed off easily, a few hours after they had voted, despite the claims made by the Election Commission (EC) that the ink was indelible.

When Major Zaidi Ahmad of the Royal Malaysian Air Force (RMAF) – stationed at Butterworth – found that the indelible ink used in GE13 was not permanent, he did not want people to abuse the system and vote multiple time. He lodged a police report about the ink.

He thought he was upholding the constitution.

Today, he faces trial on various charges relating to that report and for sending text messages about the non-indelible ink.

The charges against Major Zaidi are an attempt by Umno Baru to consolidate its power by vilifying a member of the armed forces.

They want a scapegoat to teach other members of the armed forces (and also the civil servants) that they will be punished for disobeying Umno Baru.

It is also a warning to curb insubordination in the armed forces and to purge dissent.

All Zaidi wanted to do, was to tell the truth.

Zaidiâ€™s actions are in stark contrast to the army veterans whose best military offensive was to show off their butts in front of former Bersih co-chairperson Ambiga Sreenevasanâ€™s house in 2012. They were trying to intimidate her because Bersih had called for free, fair and clean elections.

Many of Zaidiâ€™s superiors kept silent, despite being aware of voting irregularities in GE13. They are the traitors because they broke their oath of allegiance. They are aware that non-indelible ink was used.

It is Zaidi who is the patriot. He sent out two text messages. One. He sought â€œdivine guidance to defend the nation from tyrants, liars and corrupt leadersâ€. Two. He urged others to â€œdefend the mother land from corrupt people and cheatersâ€ and also to stop â€œbeing cowards or else our children and grandchildren will piss on our gravesâ€.

In Malaysia, our enemy is hiding where we donâ€™t think to look. The enemy comprises the leaders and members of our administration who are obsessed with power. They successfully rig the polls to hold on to power. This type of enemy is more dangerous than any foreign invader.

Malaysians salute Zaidi for making a stand for the rakyat. Now in his hour of need, we too must make a stand and show our undivided support for him.