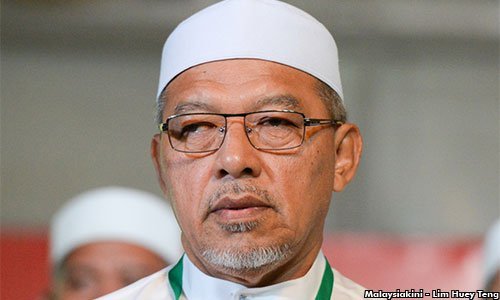 Last week, the Orang Asli (OA) community in Kelantan erected barricades against logging companies, which were encroaching onto their ancestral lands and robbing them of a livelihood.

Meanwhile, back in Kota Baru, the Kelantan Mentri Besar, Ahmad Yakob, absolved himself of the responsibility of listening to the grouses of the OA. He left the police and the forestry department to deal with the OA problem.

Has Ahmad forgotten that he is the head of Kelantan, and it is his responsibility to deal with the matter?

In 2014, when Kelantan suffered its worst flood in living memory, the MB told the Kelantanese, via Facebook, that he was trapped at home and could not distribute aid to them. He then advised village heads to organise prayer sessions to save the people from flooding.

As MB, Ahmad had access to a number of small motor boats and could have requested to be taken to the flood rescue operation centre to ensure that things were running smoothly.

Instead of being proactive, he sat at home, played on his Facebook page and prayed a lot.

Perhaps, it is time for a change of MB for Kelantan. The Kelantanese need a more dynamic and resourceful leader. The MB could have checked that his house and family are safe, before joining the rest of his emergency team. Sadly, the selfish Ahmad only thought of his own safety.

An MB who knows nothing about the Orang Asli

With the OA problem now upon him, Ahmad probably disagrees with the blockades and wonders what “livelihood” the OA are referring to.

Like other townies, Ahmad, probably thinks that the habitat of the OA is just jungle, miles and miles of rolling hills, and greenery, with the landscape ocassionaly broken by chocolate brown rivers.

Supermarket & pharmacies: What would townies like Ahmad do, if their local supermarkets and pharmacies were closed, their water supply shut, and their graveyards desecrated?

Some urbanites fail to realise that the jungle is the OA’s supermarket. Some OAs practise slash and burn cultivation, and most of them fish, hunt, grow hill rice and trade by selling jungle produce to the townspeople. They get their medicine from plants in the jungle.

Water: Our water supply comes from taps, but the OA drink and bathe in rivers, the sources of which are in the highlands.

The streams were clear and pristine, until logging activity destroyed the trees. The soil is no longer held by the tree roots, and flows into the rivers after rainfall, thus turning the river muddy.

Polluted water: Worse still, essential nutrients are leached from the soil, leaving it barren. Some logging companies use chemicals, and when rivers and streams are polluted, the water is unfit for drinking or bathing.

Many townies do not realise that the timber people don’ t just cut down trees; they desecrate sacred burial grounds, which are located in the jungle.

Mistaken view of what constitutes development: Ahmad may be well versed in quranic text and religious scriptures, but he needs to learn more about the habitat and religions of the OA, under his care.

He mistakenly thinks that indiscriminate logging and the destruction of the environment is considered development. Ahmad certainly lacks human and intellectual capital.

Kelantan and Sarawak have much in common. Both have natural wealth, from timber and oil, whilst Sarawak receives oil royalties, Kelantan does not.

The wealth from nature’s bounty has not benefited the people, as both states are the poorest in Malaysia. We can see that the former Sarawak Chief Minister (CM), Taib Mahmud, flaunts his wealth, but where has the money from timber gone, in Kelantan?

The bumiputeras of both states have something else in common. They are marginalised, maligned and denied their rights, despite the protests of the CM and MB, who say that the indigenous people have not been mistreated.

Ahmad should stop exploiting the OA, or step down, now.

The Kelantan MB has proven himself to be unfit for office. He should resign.