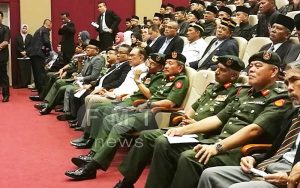 An outraged rakyat criticised PKR’s Anwar Ibrahim, for gate-crashing an event at an army camp in PD, to campaign.

Stung by the criticism, the PKR communications director, Fahmi Fadzil, stated that Anwar was at the army camp simply as a guest. He said, “It was not part of his campaigning programme. (Anwar) stands by his principle that no government machineries will be used in his by-election campaign” .

Really? Isn’t it strange that the reporters were not told this, when they quizzed Anwar about his presence, at the event, that day! 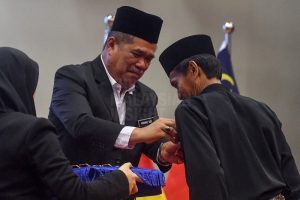 The man who will stand to lose the most, from the appearance of Anwar Ibrahim, at an awards ceremony for army veterans, is the Defence Minister, Mohamad Sabu, aka Mat Sabu.

Despite the protestations from both Anwar and Mat Sabu, that Anwar’s presence was unplanned, most of the rakyat do not believe either man. When quizzed by reporters, Mat Sabu denied that public resources had been used, to campaign for Anwar.

The rakyat will disagree. From their vantage point, Mat Sabu seemed to be giving Anwar an unfair advantage. This is wrong. Malaysians voted for change in GE-14. They want fairness, principled politicians and a stop to Umno-Baru/BN type practices. 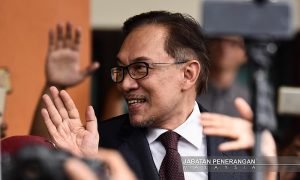 Anwar only thinks of himself

Anwar should have been barred from the event, but Mat Sabu is probably too polite, or too well brought up, to turn him away. As both are  leaders of their respective parties in the Pakatan Harapan (PH) coalition, Mat Sabu would not want to seem rude, or snub Anwar, but he was probably seething inside. Anwar appears to have little regard for Mat Sabu’s position.

Mat Sabu’s detractors will criticise him for politicising the event and for using government machinery to help Anwar’s campaign.

On the other hand, Anwar will only reinforce the rakyat’s belief that he is so desperate to get ahead in the polls that he is prepared to jeopardise Mat Sabu’s reputation, by making this surprise appearance at the awards ceremony.

The event, at the Army Museum Port Dickson, was arranged so that Mat Sabu could present the veterans with the Malaysian Service Medal (PJM). This award was for members of the armed forces who fought against the Community Party of Malaya, and the North Kalimantan Communist Party. 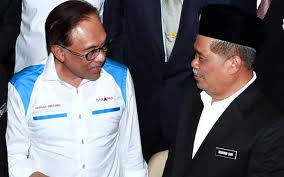 Anwar occupied a VIP seat during the event. This will not go down well with many people. He should be treated like any other of the Port Dickson candidates. If Anwar can be given special treatment, then so should the other six MP hopefuls.

Anwar has discredited Mat Sabu in the eyes of the Port Dickson electorate, and decent thinking Malaysians. The self-appointed “prime-minister-in-waiting” lacked judgement and compromised the Defence Minister.

Did Awnar want to meet the army veterans to placate them, especially as their elected MP, a former military man, the retired rear-admiral, Danyal Balagopal Abdullah, resigned for Anwar to make his dreams come true? Danyal’s reputation is now like mud. Many people were furious with him, and they said that if they had known this was going to happen, they would not have supported him, morally or financially, in his bid to contest the seat, before GE-14. 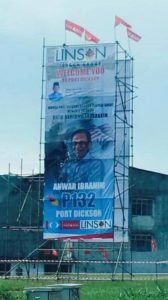 Anwar said he will not take advantage of government resources

Last night, Anwar warned against the abuse of power by government servants. A few weeks ago, he said that  he would not take advantage of government resources to campaign. His appearance has compromised Mat Sabu and undermined the people’s trust in the Defence Minister.

Was Mat Sabu’s arm twisted?  Anwar occupied a seat in the front row, and then sat at the VIP table for makan. Later, they left together in the Minister’s official car.

Mat Sabu should have put a stop to Anwar’s manipulation. Anwar does not care if he damages Mat Sabu’s reputation. His presence wasn’t just damaging, but appeared to be an attempt to steal the thunder from Mat Sabu’s engagement with the veterans. This event will be one of the few occasions when Mat Sabu can interact with the men under his wing.

Mat Sabu further damaged himself, when he made promises on behalf of Anwar, and said that the welfare of the army veterans would be taken care of, if Anwar was returned as the new Port Dickson MP. What will happen if Anwar loses? Only make promises which you can keep.

Mat Sabu! The welfare of the army veterans is under your purview. You are the Defence Minister. You fight on their behalf. You promote their demands and advise parliament on ways to help them, after their selfless dedication and service to the nation. Their well-being is your responsibility. 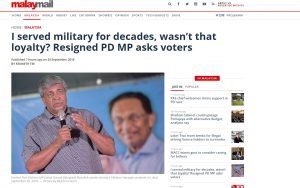 By his despicable actions in Port Dickson, Anwar has shown that his ability to make rational decisions has been overtaken by his desperation for power.

He has also shown that he is willing to walk over politicians and the rakyat to achieve his selfish aims.

The more he exposes his true character, sooner will the scales fall from the eyes of the rakyat.

Anwar’s antics are reminiscent of the disgraced, former self-styled First Lady of Malaysia (FLOM). Neither are, or were, elected representatives of the government, but act as if they were.