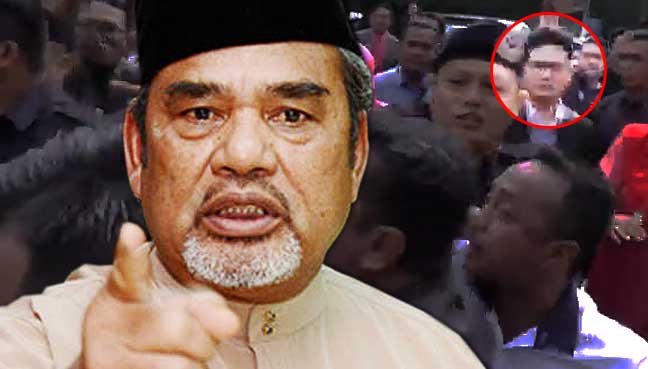 The Deputy Agriculture and Agro-based Industries Minister, Tajuddin Abdul Rahman, insulted the DAP MP for Seputeh, Teresa Kok, and called her a “woman with a Kok”. This sexist remark was made in parliament.

Tajuddin refused to apologise for his crude comments, and the Deputy Speaker, Ronald Kiandee, refused to censure him.

So, they should have not have been surprised when other MPs decided  to label Tajuddin a boor.

Opposition MP for Shah Alam, Khalid Samad did precisely this, when he called Tajuddin “sial”.

An upset Tajuddin is suing Khalid, the NST and KiniTV.

Najib Abdul Razak, has established friendly trade and diplomatic ties, with the People’s Republic of China (PRC). What would the response be from the several million Koks living in the PRC, when they find out that Najib’s MP had insulted the Chinese with the family name, Kok?

Tajuddin probably thought that he was being smart and macho. Instead, he lowered the Malay maruah (dignity), shamed Malaysians, insulted all women and embarrassed his family.

Umno-Baru MPs, who make sexist comments, forget that they are role models and that their behaviour and speech are being watched by our young.

Is Tajuddin a meek pussy cat or a loutish bully at home?

Tajuddin set a bad example to other Malays and shamed the Malays in the eyes of the other communities.

Perhaps, we should question Tajuddin’s upbringing. What must it be like in the Tajuddin household? Is he the dictator at home, or a meek pussy cat?

This is not the first time an Umno-Baru MP has made sexist remarks in parliament.

Do female Umno-Baru MPs accept his derogatory comments? Their silence shows that blind party loyalty, has let the women down.

No one feels sorry for the “sial” MP

Few people would feel sorry for Tajuddin who said, “If my father and mother were alive today, how would they feel, someone calling me sial?” Sial means to be damned and cursed.

Why didn’t he think of this earlier?

Khalid was right to defend Kok.

Tajuddin claims to be a pious Muslim and is often seen wearing a songkok, but underneath the “I-am-a-good-Muslim” exterior, his actions were un-Islamic. His conduct reflects badly on the Malays and on the country.

If Tajuddin had been properly brought up and schooled, he would not have made that double entendre, about Teresa as a “woman with a Kok”, in the House.

He would not like it if we were to refer to him as “the MP with no balls”.

The Deputy Women, Family and Community Development Minister, Chew Mei Fun, swiftly challenged Tajuddin and told him to be more respectful. Chew, who is also the MCA vice president said, “Tajuddin’s boorish behaviour is a self-reflection of his warped mental thoughts and imagery.

“Such behaviour is least expected of a deputy minister.”

The Minister for Culture & female Umno-Baru MPs let us down

What happened to the Culture, Arts and Heritage Ministry campaign called  “Courtesy is our Culture” launched in 2008?.

Why are the female Umno-Baru MPs quiet? Are they afraid of challenging a sexist Malay male MP?

Children in the playground behave much better than Umno-Baru MPs.

MPs who make foul mouthed, sexist comments should be banned, fined and taught a lesson they will not forget easily.

Tajuddin, labelled “sial” by another MP should apologise; but he is too arrogant.

(The remarks were made in November 2016. A few days ago, Tajuddin said he was going to sue Khalid, NST and KiniTV.)