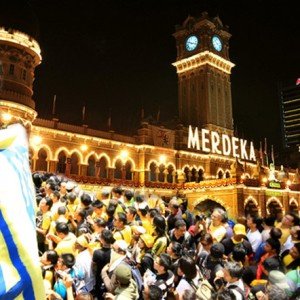 Our first Merdeka was held there. Now we dream of a second Merdeka, from the message of BERSIH 4.

Dataran Merdeka plays a symbolic role in our parliamentary democracy. This is the prime reason that the authorities continually refuse permission, for rallies to be held there.

Older Malaysians remember how they were freed from their colonial masters, the British, fifty eight years ago. Tunku Abdul Rahman was present at the Selangor Club padang, the present Dataran Merdeka, when the Union Jack was lowered, and the Malayan flag raised, at midnight, on the eve of 31st August 1957.

Today, our second Merdeka, will free us from oppression, where equality and justice are upheld and Malaysians can live in harmony, with their fellow Malaysians. BERSIH 4 will start a process, towards democracy and equality.

The authorities have declared Bersih 4 an illegal organisation.

Why?? It is because they are afraid. Afraid of the VOICE of the PEOPLE.

The Umno-Baru supporters tried to intimidate ordinary rakyat with their show of breaking roof tiles with the heads.

Are the red-shirted fools that stupid? The country is being bled dry, people are being locked away for speaking the truth, healthy men die from “asthma” or sudden death”, and pretty models die because they know too much, or get in the way of ambition.

The organisers are accused of starting a revolution; but nothing could be further from the truth.

Some people have suggested that Bersih organises the rally in a stadium. Ambiga Sreenevasan, the former co-chairman of Bersih 2.0 said, “The people who suggest the stadium, don’t really appreciate what Freedom of Assembly means.

“In democratically elected countries, rallies happen regularly, so that the voice of the people can be heard. If they put you in a stadium, they can ignore you and forget about the message you are trying to tell them.”

The police are also affected by the GST and other injustics. Civil servants are being transferred or get the sack just because they are doing their jobs. Who knows, one day, it may happen to you?

Will Najib share his RM2.6 billion with the other BR1M recipients? Of course he won’t.

The only solution is for Malaysians to help one another. Najib Abdul Razak and his sham Malaysian democracy, can expect more marches and more resistance from the rakyat.

If the organisers say they will not disturb the celebrations for Merdeka, and will skirt around the preparations, they are right. BERSIH 4 and other rallies are peacefull rallies. Last time, it was the police and agent provocateurs which started the trouble.

Be prepared for people like the Umno-Baru thugs in their red-shirts or plain clothed hooligans and vandals to disrupt the peace.

The police can do their jobs and enforce and arrest these thugs. We are not the enemy. After all, Bersih 4 is also about them too.

The authorities will have given Bersih 4 organisers the run-around and instructed them to have the rally in a stadium; but we say, “No!”

The only place for BERSIH 4 is DATARAN MERDEKA.

The authorities want to deny the organisers of Bersih 4, a moral victory by having the rally at Dataran Merdeka.